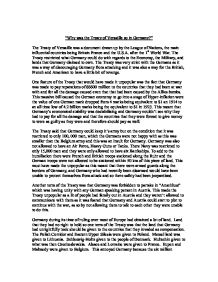 Why was the Treaty of Versailles so in Germany?

"Why was the Treaty of Versaille so in Germany?" The Treaty of Versaille was a document drawn up by the League of Nations, the main influential countries being Britain France and the U.S.A. after the 1st World War. The Treaty restricted what Germany could do with regards to the Economy, the Military, and lands that Germany claimed to own. The Treaty was very strict with the Germans as it was a way of discouraging Germany from attacking and it was also a way for the British, French and American to have a little bit of revenge. One feature of the Treaty that would have made it unpopular was the fact that Germany was made to pay reparations of �6600 million to the countries that they had been at war with and for all the damage caused even that that had been caused by the Allies bombs. ...read more.

To add to the humiliation there were French and British troops stationed along the Ruhr and the German troops were not allowed to be stationed within 50 km of this piece of land. This must have made the unpopular as this meant that there were armed guards along the borders of Germany, and Germany who had recently been disarmed would have been unable to protect themselves from attack and so there safety had been jeopardised. Another term of the Treaty was that Germany was forbidden to partake in "Anschluss" which was having unity with any German speaking person in Austria. This made the Treaty unpopular as a lit of people had family out in Austria and they weren't allowed to communicate with them as it was feared that Germany and Austria could start to plot to continue with the war, as so by not allowing them to talk to each other they were unable to do this. ...read more.

The three plebiscites were Western Upper Silesia, Allenstein and Southern Schleswig-Holstein. All three of the Plebiscites voted to stay pert of Germany. The part of the Treaty that was worst from Germany's point of view was the fact that they did not have a choice when it came to signing the Treaty. They were told that unless they signed they would be invaded by Allied troops. They were also not allowed at the conference where the Treaty was being formulated and therefore couldn't object to any of the rules. The German People refereed to the Treaty as a "Diktat" as they wee dictated to what they could and couldn't do. The Allies made them to take responsibility for all the damage done even that caused by them, and the blame for starting the war. The League of Nations also said that even though Germany had carried out it's part in the Treaty that they couldn't then become part of the league of Nations this made Germany feel that they were not respected or valued by the other countries who were all ready a member. ...read more.

This is a very detailed response that demonstrates excellent and precise knowledge and stays focused on the question throughout. Unfortunately it lacked a conclusion, where the key reasons for the treaty's unpopularity could have been summarised. 5 out of 5 stars.