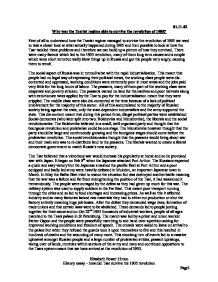 Why was the Tsarist regime able to survive the revolution of 1905?

01.11.02 Why was the Tsarist regime able to survive the revolution of 1905? First of all to understand how the Tsarist regime managed to survive the revolution of 1905 we need to take a closer look at what actually happened during 1905 and then possible to look at how the Tsar tackled these problems and therefore we can build up a picture of how they survived. There were many factors which led to the 1905 revolution, many of them long term causes and a couple which were short term but really blew things up in Russia and got the people very angry, causing them to revolt. The social aspect of Russia was in turmoil what with the rapid industrialisation. This meant that people had no legal way of expressing their political views, the working class people were dis-contented and oppressed, working conditions were extremely poor in most areas and the jobs paid very little for the long hours of labour. The peasants, many of them part of the working class were desperate and poverty stricken. The peasants owned no land for themselves and poor harvests along with extortionate taxes applied by the Tsar to pay for the industrialisation meant that they were crippled. The middle class were also dis-contented at the time because of a lack of political involvement for the majority of this sector. All of this accumulated to the majority of Russian society being against the state, only the state-dependent industrialists and the army supported the state. ...read more.

This stated: that a parliament or duma elected by the people, civil rights e.g. freedom of speech and conscience and uncensored newspapers and the right to form political parties. The Duma would share power with the Tsar and therefore people would have more of a say. At first the Tsar was unwilling to sign but he realised that this was the only way to end the revolution and so this was signed and proposed to the people on 30th Oct 1905. This resulted in the liberals and middle classes believing that they had won democratic government and meant that they stopped their protests and began to support the government again and work with what they had achieved. I think though that they may have had clouded mis-judgment though when they accepted the terms as I think that the people knew the Tsar well enough to realise that he would work the manifesto to his benefit and retain full control of Russia. The Tsar was though very devious later on, after the manifesto was issued but the parties may have been a little bit na�ve in believing he would carry out everything that he said he would do. Not everyone though was satisfied with the October Manifest and they realised what little was being offered to them and so decided to carry on with their revolution. They were now though very much the weaker side what with the majority of Russia once again supporting the Tsar and so Nicholas found it much easier to suppress their oppositions and disturbances without any more damage to his name. ...read more.

All the workers were made to begin employment again or face thugs going into the countryside to beat or kill them. I think that this may have stirred up yet more hatred towards the Tsar as they would have felt worthless and un-important to him. He did not care enough to give them any democratic rights and he had his men killing them if they demonstrated to show their dis-content. I believe that dis-content never fully went away with certain parties and social classes in Russia but they had to accept defeat as the main opposition were happy with the October Manifest. As we have seen they were however wrong to accept the manifesto as the Tsar managed to reverse the whole manifest via the fundamental laws because his troops remained loyal and would back should any opposition try to create another overthrow when the fundamental laws were issued. The troops and the autocracy, the most powerful people still believed in the Tsar and this was his most powerful asset. If he lost them he would quite easily be pushed off the throne. As I mentioned when analysing Trotsky's quote I think that 1905 was a dress rehearsal for 1917 when a full blown revolution took place, the Tsar had to abdicate as even his troops went against. The Tsar led a very specific and well thought out regime and his ministers worked it well to ensure that he survived this set of event in 1905, relatively unscathed as once again he took full control of Russia and its government. Elizabeth Power 12mco History essay - how did Tsar survive the 1905 revolution Page1 ...read more.