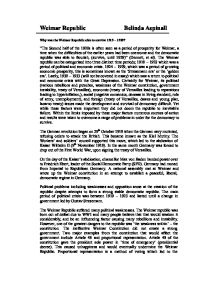 Weimar Republic Belinda Aspinall Why was the Weimar Republic able to survive 1919 - 1929? "The Second half of the 1920s is often seen as a period of prosperity for Weimar, a time when the difficulties of the earlier years had been overcome and the democratic republic was able to flourish, (survive, until 1929)" (Dennett, et al). The Weimar republic can be categorised into three distinct time periods; 1918 - 1923 which was a period of political and economic crisis. 1924 - 1929, which was a period of growing economic prosperity, this is sometimes known as the 'Stresemann era' or the 'golden era'. Lastly, 1930 - 1933 (will not be covered in essay) which saw a return to political and economic crisis with the Great Depression. Certainly for Weimar, its political (various rebellions and putsches, weakness of the Weimar constitution, government instability, treaty of Versailles), economic (treaty of Versailles leading to reparations leading to hyperinflation,), social (negative consensus, decease in living standard, role of army, unemployment), and foreign (treaty of Versailles, dawes and young plan, lacarno treaty) issues made the development and survival of democracy difficult. Yet while these factors were important they did not doom the republic to inevitable failure. ...read more.

This was fundamental in Weimar's survival from 1919 - 1929. It was 'strength at the centre' that Stresemann promoted which united the republic together. This was how Stresemann overcame the problem of proportional representation - the government had enough members of the Reichstag supporting it to pass laws it needed. The Weimar Republic not only faced many political problems that exacerbated the risk of the republic's collapse but also had to face many economic issues. The treaty of Versailles, which formally ended the war, was imposed on Germany and was considered to be very harsh. The treaty of Versailles was an economic burden to Germany in many ways. Germany was forced to give up 13% of its territory and hence lost a portion of its population. This also resulted in the deprivation of natural resources, ships, trains and even factory equipment. The treaty limited Germany's armed forces. One of the most important clauses of the treaty, the war guilt clause, stated that Germany must accept responsibility for loss and damage caused by the war. This meant Germany could be forced to pay reparations. This would prove to be the cause of Germany's hyperinflation and the crisis of 1923 and Germany's biggest economic burden. ...read more.

that Germany could do anything regarding these foreign issues. Stresemann improved Germany's international standing by signing the Locarno Treaty in 1925, agreeing the lose of Alsace Lorraine. In 1926, Germany was allowed to join the League of Nations. Under the new government led by Stresemann Germany had become a world power again. Weimar's 'golden era' can be viewed very differently by different historians. It can be viewed as the period that led to Weimar's survival between 1919 - 1929. "Success in foreign policy created a stable economy and Cultural Revolution and suppressed political violence" (Dixon). An alternative view is critical of Stresemann's actions. For example, in domestic politics there were constant shifts on power adding to the period's instability. As a result, "discontent with party and parliamentary government became widespread, already foreshadowing the transformation into an authoritarian presidential regime" (Kolb, 1988) By the end of 1924, the Weimar Republic appeared to have survived its crisis and to have entered a period of stability. In the first five years of the Weimar republic, survival was a struggle. It had to overcome political (weaknesses, opposition), economic crises, and social and foreign issues. The survival of the Weimar Republic from 1919 - 1929 can be reduced down to the overcoming of rebellions and major achievement in the fields of welfare, culture, politics and economic growth after 1923. ...read more.