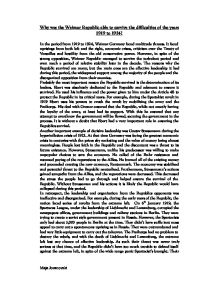 Why was the Weimar Republic able to survive the difficulties of the years 1919 to 1924? In the period from 1919 to 1924, Weimar Germany faced multitude threats. It faced uprisings from both left and the right, economic crises, criticism over the Treaty of Versailles and hostility from the old conservative power. However, in spite of the strong opposition, Weimar Republic managed to survive the turbulent period and even reach a period of relative stability later in the decade. The reasons why the Republic survived are many, but the main ones are the effective leadership it had during this period, the widespread support among the majority of the people and the disorganized opposition from their enemies. Probably the most important reason the Republic survived is the determination of its leaders. Ebert was absolutely dedicated to the Republic and adamant to ensure it survived. He used his influence and the power given to him under the Article 48 to protect the Republic in its critical years. For example, during the Spartakist revolt in 1919 Ebert uses his powers to crush the revolt by mobilizing the army and the Freikorps. ...read more.

However, the Spartacists only had about 5,000 people in Berlin at the time. They didn't have sufficient mass appeal to carry out a spontaneous uprising as in Russia. They were outnumbered and had very little equipment to carry out the takeover. The Freikorps had no problem to destroy the rebels, and with the death of Liebknecht and Luxemburg, the extreme left lost any chance of effective leadership. As such their threat was never truly serious at that time, and the Republic didn't have too much trouble to defend itself against the extreme left, in spite of the wide range panic Spartacist's brought. Their disorganisation was their downfall, and it ensured that the left will never be strong enough to pose a serious threat to the Republic. Similarly, the Republic faced the threat from the right. Although the extremist right had a far more wide-ranging support than the left, especially in the elite aspects of the society, they were divided. The right was divided over the Monarchist such as DNVP and Nationalist groups such as NDSAP. ...read more.

And as such it was able to meet the various threats and to preserve. Finally, the government had a major asset in the agreement Ebert had with Groner. Without the support of the army no opposition could truly be effective. The army's support of the Republic, although given grudgingly was priceless. This can be seen from situations such as crushing of the Sparatcist revolt and the Munich Putsch. Furthermore, the army's neutrality during the Kapp Putsch ensured that it couldn't be successful. As long as the army stayed on the Republics side, the government was able to survive any threat it faced. The threats Weimar Republic faced between 1919 to 1924 were numerous. However, the Republic survived. This can be attributed to a mixture of the governments strengths and the weaknesses of its enemies. The Republic during this period had strong and decisive leadership in Ebert and Stresemann, while their enemies on the right and the left had poor leadership and bad organization. The government had a wider-range support, while the left and the right never managed to achieve majority support. The support of the army was a decisive point. The Republic survived the threats and went on to thrive in the Weimar's Golden years. ?? ?? ?? ?? Maja Jovanovski ...read more.