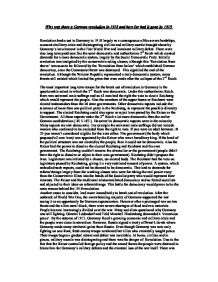 Why was there a German revolution in 1918 and how far had it gone by 1919 Revolution broke out in Germany in 1918 largely as a consequence of the severe hardships, economic/military crisis and disintegrating civilian and military morale brought about by Germany's involvement in the First World War and imminent military defeat. There were also long term problems like the semi-democratic and authoritarian 2nd Reich which created demands for a more democratic system, largely by the Social Democratic Party. Initially revolution was instigated by the conservative ruling classes, although this 'Revolution from above' was soon to be followed by the 'Revolution from below' which established German democracy, once the Communist threat was destroyed. This signalled the end of the revolution. Although the Weimar Republic represented a truly democratic system, many threats still existed which limited the gains that were made after the collapse of the 2nd Reich. The most important long term reason for the break out of revolution in Germany is the questionable extent to which the 2nd Reich was democratic. Under this authoritarian Reich, there was universal male suffrage and so all men had the right the vote to elect a Reichstag which would represent the people. Also the members of the upper house or Reichsrat were elected ambassadors from the 26 state governments. ...read more.

Germany was on the verge of a communist revolution and to try to avoid further chaos; a German republic was declared, the Kaiser was forced to abdicate and Ebert replaced Prince Max as the leader of the SPD. Again the removal/Abdication of the Kaiser and other members of the aristocracy was another achievement of the German Revolution, along with the collapse of the Authoritarian Government of the 2nd Reich. Two days later the armistice was signed which signalled the end of suffering and was therefore seen as an achievement gained from the Revolution. However the armistice gave rise to the 'Stab in back theory' which undermined support for the new democracy (blamed for military defeat). This could therefore be seen as a factor, which limited the achievements, made from the revolution. This theory was created by Lundendorff to shift blame of military defeat away from High command. He claimed that support for the army had been undermined by the democratic Reichstag who demanded peace and that the German army would eventually have been victorious if left alone. This idea culminated in the revolution of November 1918. The motivation for such a theory being proposed undermines the validity of the theory itself. ...read more.

They convinced themselves that Germany too was ripe for a radical working-class revolution (they had badly miscalculated). Due to the fact that the majority of the Germans supported Parliamentary democracy, their attempted revolt in January 1919 forced Ebert to do a deal with Groener and played right into the hands of the conservative forces (claiming that they were protecting Germany from the threat of Communism). In the end there was little real change. The removal of the Kaiser and the German monarch was seen by some as more symbolic than significant and for many Germans the spirit of Imperial Germany lived on. The majority of Germans were quite conservative and did not want a communist revolution. Most Germans favoured a shift to a Parliamentary Democracy not full-blooded socialism. Therefore any support for a communist/spartakist revolution was limited. There were also arguments that the revolution ran away with itself. The sustainability of the government and democratic control was questioned, as institutional centres of the old ruling classes remained intact. Many saw the republic as originating in a revolution and therefore, illegitimate or 'the convenient means of filling a void left by collapse of Monarchy'. While the forces of the left also posed a threat for the new democracy, the more powerful forces of the right served to remind the new democracy that the revolution was far from secure in 1919. ...read more.