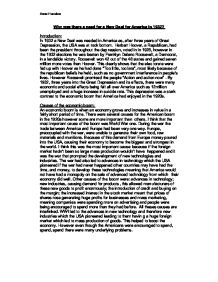 Why was there a need for a New Deal for America in 1932? Introduction: In 1932 a New Deal was needed in America as, after three years of Great Depression, the USA was at rock bottom. Herbert Hoover, a Republican, had been the president throughout the depression, voted in in 1928, however in the 1932 elections he was beaten by Franklyn Delano Roosevelt, a Democrat, in a landslide victory. Roosevelt won 42 out of the 48 states and gained seven million more votes than Hoover. This clearly shows that the electorate were fed up with Hoover as he had done "Too little, too late", most likely because of the republican beliefs he held, such as no government interference in people's lives. However Roosevelt promised the people "Action and action now". By 1932, three years into the Great Depression and its effects, there were many economic and social effects being felt all over America such as 12million unemployed and a huge increase in suicide rate. This depression was a stark contrast to the economic boom that America had enjoyed in the 1920s. ...read more.

This helped to boost the economy. However even though the Americans were encouraged to spend, spend, spend there were many underlying problems. Causes of the Wall Street crash and Great Depression: During October 1929 the American stock market, on Wall Street, crashed. There were several causes of the crash some of them long term and others short term. I think that the most important cause of the crash was the overproduction of goods. During the 1920s the US industry had become more efficient and cheap and due to the introduction of many new, luxury goods such as fridges sales, and profits, went up. The problem with this was that these goods were the type of things that people needed only one of. The factories kept producing but the market wasn't there and their profits eventually started to fall, as did share prices. This fall in share prices coupled with people's fear of debt caused panic selling which cause the stock market to crash. The uneven distribution of wealth in the USA meant that the market for the new, luxury goods was small, the people who lived in poverty would never be able to buy things such as vacuums and fridges so once all the richer people had bought them the market disappeared. ...read more.

This was because people had enough trouble looking after themselves and didn't want the added responsibility of having to provide for a spouse and possibly children. There was also a fall in the birth ate, people wouldn't have had enough money to provide food for their children. The effects of the great depression were soon felt around the world. This was because many countries were dependant on the USA. The reparations cycle linked Germany and Britain to America. Because the American economy failed America recalled all their loans putting great financial pressure on Britain and especially Germany. Reparations cycle diagram The Great depression also badly effected Japan. They provided silk for the world however this was a luxury good and with so little money being around their trade collapsed. Desperate for much needed raw materials they resorted to violence, invading a part of China called Manchuria. The effects were felt particularly badly in Germany. They had been dependant on America for loans to help pay reparation to the allies without these loans they had t pay huge amounts of money to Britain, France and Belgium and also to America who recalled all of their loans. By 1933 6million people in Germany were unemployed and their economy had collapsed. ?? ?? ?? ?? Anna Hunston ...read more.