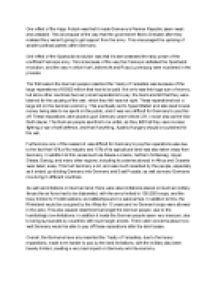 Why was there resentment towards the treaty of Versailles from the German people?

Transfer-Encoding: chunked ﻿One effect of the Kapp Putsch was that it made Germany?s Weimar Republic seem weak and unstable. This is because of the way that the government fled to Dresden after they realised they weren't going to get support from the army. This encouraged the uprising of smaller political parties within Germany. One effect of the Spartacist revolution was that it's demonstrated the ship power of the unofficial Freikorps army. This is because of the way the Freikorps defeated the Spartacist revolution, and the way in which Karl Liebknecht and Rosa Luxemburg were murdered in the process. ...read more.

These reparations were placed upon Germany under Article 231, known also as the War Guilt clause. The German people saw this to be unfair, as they felt that they were moreso fighting a war of self-defence, and that if anything, Austria-Hungary should be punished for the war. Furthermore one of the reasons it was difficult for Germany to pay the reparations was due to the fact that 10% of its industry and 15% of its agricultural land was also taken away from Germany. In addition to this, areas such as Alsace-Lorraine, northern Schleswig, Upper Silesia, Danzig, and many other regions, including its colonies abroad in Africa and Oceania were taken away. ...read more.

In addition to this, the Rhineland would be occupied by the Allies for 15 years and no German troops were allowed in the area. This also caused resentment amongst the German people, due to the humiliatingly low limitations. In addition it made the German people seem very insecure, due to being surrounded by countries with much larger armies. There were concerns about how well Germany would be able to pay off these reparations after the land losses. Overall, the Germans have any resented the Treaty of Versailles, due to the heavy reparations, made even harder to pay by the land limitations, with the military also been heavily limited, creating a very bad impact on Germany and its economy. ...read more.