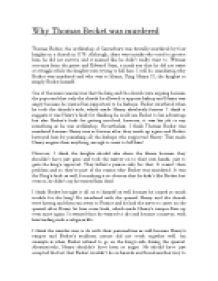 Why was Thomas Beckett Murdered?

﻿Why Thomas Becket was murdered Thomas Becket, the archbishop of Canterbury was brutally murdered by four knights in a church in 1170. Although, there were monks who tried to protect him, he did not survive and it seemed like he didn?t really want to. Witness accounts from the priest and Edward Grim, a monk say that he did not resist or struggle while the knights were trying to kill him .I will be considering why Becket was murdered and who was to blame, King Henry II, the knights or simply Becket himself. One of the main reasons was that the king and the church were arguing because the pope said that only the church be allowed to appoint bishop and Henry was angry because he wanted his supporters to be bishops. ...read more.

This made Henry angrier than anything, enough to want to kill him! However, I think the knights should also share the blame because they shouldn?t have just gone and took the matter on to their own hands, just to gain the king?s approval. They killed a person only for that. It wasn?t their problem and so they?re part of the reason why Becket was murdered. It was the King?s fault as well, for making it so obvious that he didn?t like Becket but even so, he didn?t say he wanted him dead. I think Becket brought it all on to himself as well because he caused so much trouble for the king! He interfered with the quarrel Henry and the church were having and then ran away to France and he had the nerve to carry on the quarrel after Henry let him come back, which made Henry?s temper flare up even more again. ...read more.

It was the fact that they were both so determined, proud and ambitious and setting out to do what they thought was right: Henry having more power against the church and being able to control it and Becket trying to make sure he didn?t. Plus, doing things that infuriated Henry. Both of them thought that only they would win which left them in a complicated situation and one of them dead. I think all of them were to blame of Becket?s murder, King Henry II , the knights and Becket. Henry and Becket, because of their personality clash and the knights because of their interference. However, it was something else as well like the some of the problems the church and the king had like the problems about the courts and power, etc. By Ayesha Hashim, 7S ...read more.