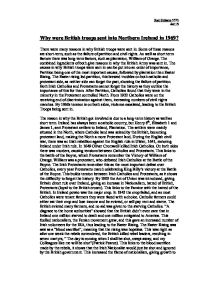 Hari Sukarjo 5572 44115 Why were British troops sent into Northern Ireland in 1969? There were many reasons in why British troops were sent in. Some of these reasons are short-term, such as the failure of partition and civil rights. As well as short term factors there was long-term factors, such as plantation, William of Orange. The combined ingredients of both give reasons in why the British Army was sent in. The causes in why British troops were sent in can be put into an order of importance, Partition being one of the most important causes, followed by plantation then Easter Rising. The Easter rising led partition, this brewed troubles on both catholic and protestant side, as neither side can forget the past, showing the failure of partition. Both Irish Catholics and Protestants cannot forget the history as they outline the importance of this for them. After Partition, Catholics found that they were in the minority in the Protestant controlled North. From 1922 Catholics were on the receiving end of discrimination against them, increasing numbers of civil rights marches. By 1960s tension is on both sides, violence escalated, leading to the British Troops being sent in. The reason in why the British got involved is due to a long-term history as well as short term. Ireland has always been a catholic country, but Henry 8th, Elizabeth 1 and James 1, sent Protestant settlers to Ireland, Plantation. ...read more.

In Northern Ireland Catholics were on the receiving end of discrimination. Protestants got all the best jobs; hardly any Catholics got a job in the civil service. It even went to phone calls. Richard Dawson Bates (Minister of Home Affairs) refused to use his telephone until a catholic phone operator in his department got transferred. There was segregation in Irish life, Protestants go separate places to Catholics, and this even affected children, separate school for separate religions. In elections Nationalists hardly got to have their say in the government as the Unionist fixed elections, gerrymandering. Unionist's got their way, while the British government did nothing to stop it. But from 1940s to1960s there was less troubles between Northern Ireland and The Irish Republic, basically "good neighbours". This was mainly because the North was richer and more prosperous since it had become part of Britain. In 1945 the welfare state was introduced. This improved conditions in the North by a special Housing Trust, insurance, family allowance, NHS and industrial development funding. Education reforms meant that peoples education benefited, children got free school meals, giving hope to the future. Both Catholics and Protestants saw the benefits with living alongside with Britain. But as the North prospered, the south didn't. Unemployment and poverty became major problems in the republic. Farmers struggled against foreign competition. High food prices against low wages showed that the economy was struggling in the republic. ...read more.

1500 being Catholic families. The RUC had incorrect intelligence, believing that an IRA led uprising was imminent. The RUC asked the British army for Support. The RUC claimed that if the British troops didn't get involved in Ireland there would be a massacre. So on the 15th of August 1969 the British army arrived in the Belfast streets. In Conclusion the reasons why the British Army was sent in, was due to the combined ingredients of the long and short term causes. The Plantation created a religious divide in Ireland; the Easter rising gave way to the rise of the Sinn Fein and emergence of the IRA, leading to the Partition of Ireland and the Failure of Partition after 1922.The Violence in the late 1960s gave way for the Army going in. The violence broke out mainly because of both Catholics and Protestants not willing to forget the past, the whole feud between Irish Catholics and Protestants was based on past events. If both sides forgot the past there would have been no need to send British Troops in, or any Troubles being started. But the religious differences between the Catholics and Protestants can be primarily routed to the Plantation. The British wanted to assert Ireland, by Plantation the British created a problem that was never solved. The reason why the British Army was sent into Ireland was the problem created by Britain. If Britain didn't get involved in Ireland, a problem would never have been created, resulting in there being no Easter Rising or Partition of Ireland. ...read more.