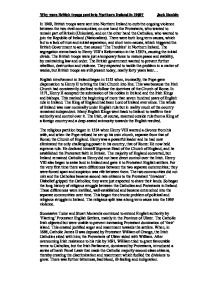 Why were British troops sent into Northern Ireland in 1969? Jack Rankin In 1969, British troops were sent into Northern Ireland to curb the ongoing violence between the two rival communities; on one hand the Protestants, who wanted to remain part of Britain (Unionists), and on the other hand the Catholics, who wanted to join the Republic of Ireland (Nationalists). There were both long term causes, which led to a lack of trust and initial separation, and short term causes, which triggered the British Government to act, that caused 'The Troubles' in Northern Ireland. The segregation stems back to Henry VIII's Reformation in the 1530's, causing the initial divide. The British troops were just a temporary force to restore peace and stability, by maintaining law and order. The British government wanted to prevent further rebellion, destruction and violence. They expected to tackle the problem in a matter of weeks, but British troops are still present today, nearly forty years later... English involvement in Ireland began in 1155 when, ironically, the Pope gave dispensation to Henry II to bring the Irish Church into line. ...read more.

This had the opposite effect and a number of rebellions against British rule ensured. It was the intention of nationalist parties, such as Sinn Fein, to create a single-Irish republic. In the Easter Rising of 1916 the Irish Republicans (extreme Nationalists) seized a number of buildings in Dublin, including the General Post Office, and declared an Irish Republic. Irishmen were astonished, and very few supported the Rising. It was crushed by the British Army and rebel leaders were ignominiously executed. This barbarity shocked the Irish people and led to a sway in support of the republicans. There was a stronger support for Nationalism. The Easter Rising was a major turning point in Irish history and inspired many Nationalists and the heavy handed British response enraged and infuriated the population of Ireland; things would never be the same again. Most importantly it led to an increase in violence between unionists and nationalists. The Rising was a medium-term cause in the violence of 1969 which inspired political debate across the country for an independent Ireland. Spitefulness and enmity was encountered by the British and rooted anti-British feeling that emerged later in 1969. ...read more.

As an immediate result of this, British troops were sent in to restore order; this was the beginning of 'The Troubles'. It was meant to be a temporary measure but British troops remain there nearly 40 years later. The reasons for the sending in of British troops into Northern Ireland in 1969, was a culmination of many long and short term causes. The people of Ireland were split at the time of the Reformation and they never got over there differences. Throughout the history of Ireland there has been two distinct separate communities; those pro-Britain and Nationalists; caused by the initial separation that was the Reformation. Events such as the Easter Rising continued to split public opinion along these lines of religion. These events caused animosity and ill-feeling between the communities and this all inevitable led to the violence and deployment seen in the 60's.Over time; mistrust and resentment was common towards the opposing community and these wounds opened in 1969 when the Catholics had had enough of Protestant domination over them. With a two-tier system of right and opportunity violence was bound to erupt. The large civil right marches triggered the violence and O'Neill's subsequent inability to handle the crisis led to the British troops being deployed into the Province. ...read more.