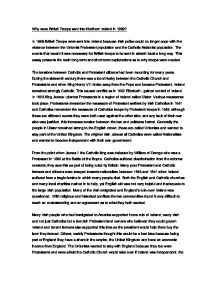 Why were British Troops sent into Northern Ireland in 1969? In 1969 British Troops were sent into Ireland because Irish police could no longer cope with the violence between the Unionist Protestant population and the Catholic Nationist population. The events that meant it was necessary for British troops to be sent in stretch back a long way. This essay presents the main long term and short term explanations as to why troops were needed. The tensions between Catholic and Protestant citizens had been mounting for many years. During the sixteenth century there was a lot of rivalry between the Catholic Church and Protestants and when King Henry VIII broke away from the Pope and became Protestant, Ireland remained strongly Catholic. This caused conflict as in 1602 Elizabeth I gained control of Ireland. In 1603 King James I planted Protestants in a region of Ireland called Ulster. Various massacres took place, Protestants remember the massacre of Protestant settlers by Irish Catholics in 1641 and Catholics remember the massacre of Catholics troops by Protestant troops in 1649, although these are different events they were both used against the other side, and any fault of their own side was justified, this increases tension between the two and validates hatred. Generally the people in Ulster remained strong to the English crown, these are called Unionists and wanted to stay part of the United Kingdom. ...read more.

The new generation was being taught by the past generation to continue to hate the person of a different religion. Catholics had less chance of getting housing; the councils used their protestant power to allocate better houses to Protestants. Catholics also had less political power. The police were mainly Protestants and there was the B-specials who were a back up police force that could be called in if needed, they were allowed to keep their own weapons, as they were usually Protestants this worried the Catholics. Elections were fixed so Catholics had little chance of being elected, even though the constitution said all elections should be proportionally represented so minority groups would be fairly represented in Northern Ireland. The Unionists abolished this for local elections. It was also only possible to vote if you were a property owner and as councils made it increasingly difficult for Catholics to get houses, it was harder than ever for Catholics to express their views, and with this it was difficult to change their status at all. As the Catholics and the Protestants lived so separately with little contact they knew very little about each other. Although relations appeared to be improving in the 1950's and 1960's, this broke down along with Northern Ireland's economic prosperity when its old shipbuilding yards and textile industries became out of date. Unemployment increased dramatically and Northern Ireland was in a terrible situation with housing, having some of the worst slum areas in Europe. ...read more.

The actions of the police at the Battle of the Bogside increased the hatred of the Catholics towards the Protestants; they had no real force to protect them from the police themselves apart from the IRA. There was a danger of the violence spreading across the province, disturbances started in many towns, the most serious fighting was in Belfast, the Catholics were attacked by the Protestants who feared their country was under threat; there was a threat of a massacre. James Chichester-Clark had little choice but to call the British Troops into Northern Ireland. The British army was seen as a neutral force, they would not take sides as the RUC did. The Catholics welcomed the forces into Northern Ireland as they knew they now had a force which would not only protect the Protestants. British Troops had not been asked for earlier, as the former Prime Minister O'Neill had expected the situation to resolve itself, Chichester-Clark saw the worst of the protests and found very little option but to call the British troops in to N. Ireland, at first the British troops were reluctant because they feared violence would reach Britain, but in the end they had little choice but to act. There was a lot of hatred in Northern Ireland that had built up over hundreds of years, this tension had developed slowly and the battle of the Bogside, which was the immediate reason forces were sent into N. Ireland, was with the peak of the anger and friction between all the sides. ...read more.