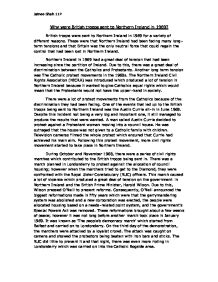 Northern Ireland in 1969 had a great deal of tension that had been increasing since the partition of Ireland. Due to this, there was a great deal of discrimination between the Catholics and Protestants. Another long term tension was The Catholic protest movements in the 1960s. The Northern Ireland Civil Rights Association (NICRA) was introduced which produced a lot of tension in Northern Ireland because it wanted to give Catholics equal rights which would mean that the Protestants would not have the upper-hand in society.

There were a lot of protest movements from the Catholics because of the discrimination they had been facing. One of the events that led up to the British troops being sent to Northern Ireland was the Austin Currie sit-in in June 1968. Despite this incident not being a very big and important one, it still managed to produce the results that were wanted. A man called Austin Currie decided to protest against a Protestant woman moving into a council house. He was outraged that the house was not given to a Catholic family with children. Television cameras filmed the whole protest which ensured that Currie had achieved his main aim. Following this protest movement, more civil rights movement started to take place in Northern Ireland.

During October and November 1968, there were a series of civil rights marches which contributed to the British troops being sent in. There was a march planned in Londonderry to protest against the allocation of council housing; however when the marchers tried to get to the Diamond, they were confronted with the Royal Ulster Constabulary (RUC) officers. This march caused a lot of violence which produced a great deal of tension on the government in Northern Ireland and the British Prime Minister, Harold Wilson. Due to this, Wilson pressed O’Neill to present reforms. Consequently, O’Neill announced the biggest reformations made in fifty years which were that the gerrymandering system was abolished and a new corporation was elected, the people were allocated housing based on a needs-related point system, and the government’s Special Powers Act was removed. These reformations brought about a few weeks of peace; however it was not long before another march took place in January 1969. It was known as ‘The people’s democracy march’ which started from Belfast and carried on to Londonderry. On the third day of the demonstration, the marchers were attacked by a loyalist crowd. The attack was caught on camera and showed the protestors being beaten with iron bars and sticks. The RUC did little to prevent it and that night, there was even more rioting in Londonderry which was carried on into the Catholic Bogside area.

Due to these events, more violence occurred at the ‘Londonderry Apprentice Boy’s’ march that took place in August. However this time, the march was followed by an extensive riot between the RUC and the residents of the Catholic Bogside area. The rioting lasted for two days while the violence spread to Belfast where thousands of people were burned out of their homes. In effect, this event became the trigger for bringing British troops into Northern Ireland.

In August after the chaos, the British Government decided to send troops into Northern Ireland. Everyone thought it was time to call them in as they were the only neutral armed force that would be able to make peace between the Catholics and the Protestants.

In conclusion, there were a variety of reasons that built up to cause chaos in the country. The events that occurred during 1968 and 1969 steadily became worse and soon it was obvious that the country needed help in regaining control. In my opinion it was the long term tensions that were the main reasons as to why the troops were brought into Northern Ireland; however the other events added to the tension.