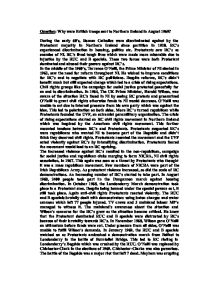 Question: Why were British troops sent to Northern Ireland in August 1969? During the early 60's, Roman Catholics were discriminated against by the Protestant majority in Northern Ireland since partition in 1920. RC's experienced discrimination in housing, politics etc. Protestants saw RC's as enemies of NI. RC's lived tough lives which were made more miserable due to injustice by the RUC and B specials. These two forces were both Protestant dominated and abused their powers against RC's. In the middle of the 1960's, Terrence O'Neill, the Prime Minister of NI elected in 1963, saw the need for reform throughout NI. He wished to improve conditions for RC's and to negotiate with RC politicians. ...read more.

This further mounted tensions between RC's and Protestants. Protestants suspected RC's were republicans who wanted NI to become part of the Republic and didn't think they deserved civil rights. Protestants resented the movement and the UVF acted violently against RC's by intensifying discrimination. Protestants feared the movement would lead to an RC uprising. The increased violence against RC's resulted in the non-republican, campaign for social justice and republican clubs merging to form NICRA, NI civil rights association, in 1967. This again was seen as a threat by Protestants who thought it was a mass republican movement. Few members of NICRA were part of the Irish Republican Army. ...read more.

In November 1968, Wilson gave O'Neill an ultimatum before funds were cut. Under pressure from all sides, O'Neill was unable to fulfil Wilson's demands. In January 1969, the RUC and B specials watched on as Protestants ambushed a demonstration march from Belfast to Londonderry in the battle of Burntollet Bridge. This led to RC rioting in Londonderry's Bogside which was crushed by the RUC. O'Neill was replaced by Chichester-Clark in the elections of 1969. Chichester-Clarke was also powerless. The battle of the Bogside was a major riot that left 7 dead. Mayhem was erupting in NI. The British government finally took the decision to send in troops to restore order. They thought the army would stabilise the situation because it would be neutral presence in NI and provide safety for the RC's. ...read more.