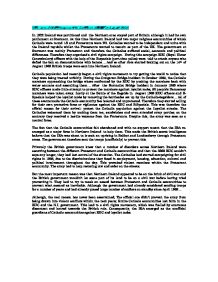 Why were British troops sent to Northern Ireland in August 1969? In 1922 Ireland was partitioned and the Northern area stayed part of Britain although it had its own parliament at Stormont. At this time Northern Ireland had two major religious communities of which Catholic were round 1/3 and Protestants were 2/3. Catholics wanted to be independent and unite with the Ireland republic whilst the Protestants wanted to remain as part of the UK. The government at Stormont was mainly Protestant and therefore the Catholics suffered social, economic and political differences. Therefore they organised a civil rights campaign. During this campaign RUC (Royal Ulster Constabulary) officers with the help of the B-specials (part-time police) were told to attack anyone who defied the ban on demonstrations with batons... ...read more.

All of these events made the Catholic community feel isolated and unprotected. Therefore they started calling for their own protective force or vigilantes against the RUC and B-Specials. This was therefore the official reason for their arrival: protect the Catholic population against the Loyalist attacks. The Catholics welcomed them by making them tea, sandwiches and even attended army parties; on the contrary they received a hostile welcome from the Protestants. Despite this, the army was seen as a neutral force. The fact that the Catholic communities felt abandoned and with no support meant that the IRA re-emerged as a major force in Northern Ireland to help them. This made the British secret intelligence believe that the IRA was about to launch an uprising in Belfast and Londonderry through Protestant areas. ...read more.

They had to try to reach an accord between Protestant and Catholic communities to prevent what seemed as inevitable. Although the government had already considered sending troops for a number of years and had already placed large number of soldiers on standby since April 1969... Although, the real reason has never been ascertained; The official one didn't prevent the army from being drawn into violent conflicts within the next years; Entire Catholic communities lost faith in the RUC and the N.I. government. This lead to a civil rights movement, which was fuelled by enormous discontent and hatred towards the British rule. Consequently, the IRA emerged as the unofficial guardians of Catholic communities against RUC and loyalist mobs. ...read more.