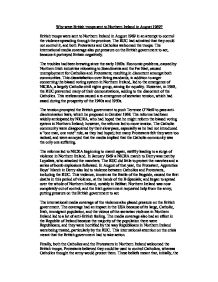 Why were British troops sent to Northern Ireland in August 1969? British troops were sent to Northern Ireland in August 1969 in an attempt to control the violence spreading through the province. The RUC had admitted that they could not control it, and both Protestants and Catholics welcomed the troops. The international media coverage also put pressure on the British government to act, because it portrayed Britain negatively. The troubles had been brewing since the early 1960s. Economic problems, caused by Northern Irish industries relocating to Scandinavia and the Far East, caused unemployment for Catholics and Protestants; resulting in discontent amongst both communities. This dissatisfaction over living standards, in addition to anger concerning the biased voting system in Northern Ireland, led to the emergence of NICRA, a largely Catholic civil rights group, aiming for equality. ...read more.

The reforms led to NICRA beginning to march again, swiftly leading to a surge of violence in Northern Ireland. In January 1969 a NICRA march to Derry was met by Loyalists, who attacked the marchers. The RUC did little to protect the marches and a series of bomb explosions followed. In August of that year, the Protestant, Apprentice Boys' March in Derry also led to violence between Catholics and Protestants, including the RUC. This violence, known as the Battle of the Bogside, caused the first deaths in this period of violence, at the hands of the B-Specials; and began to spread over the whole of Northern Ireland, notably in Belfast. ...read more.

This international attention on the crisis meant that the British government had to take action. Finally, both the Catholics and the Protestants in Northern Ireland welcomed the British troops. Protestants believed they could be used to control Catholics, whereas Catholics thought the army would protect them. These beliefs meant that, initially, the army did not face resistance. This aided their decision to enter Northern Ireland because it gave the impression that it would be an easy operation. Therefore, the army entered Northern Ireland to try and stop the violence, partly in order to protect the Catholic minority and partly to deal with the negative media coverage the British government was receiving due to the crisis; and the lack of resistance from both groups contributed to the decision. Word Count: 606 words ...read more.