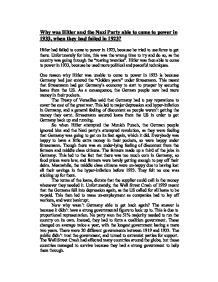 Why was Hitler and the Nazi Party able to come to power in 1933, when they had failed in 1923? Hitler had failed to come to power in 1923, because he tried to use force to get there. Unfortunately for him, this was the wrong time to try and do so, as the country was going through the "roaring twenties". Hitler was then able to come to power in 1933, because he used more political and peaceful techniques. One reason why Hitler was unable to come to power in 1923 is because Germany had just entered the "Golden years" under Stresemann. This meant that Stresemann had got Germany's economy to start to prosper by securing loans from the US. As a consequence, the German people now had more money in their pockets. The Treaty of Versailles said that Germany had to pay reparations to cover the cost of the great war. This led to major depression and hyper-inflation in Germany, and a general feeling of discontent as people weren't getting the money they earnt. Stresemann secured loans from the US in order to get Germany back up and running. So when Hitler attempted the Munich Putsch, the German people ignored him and the Nazi party's attempted revolution, as they were feeling that Germany was going to get on its feet again, which it did. ...read more.

It appealed to the un-employed/communists because it demanded a share of wealth, it appealed to nationalists by demanding the treaty of Versailles to be abolished, and it also appealed to industrialists/socialists by wiping out trade unions. So then in 1930, over 6 million people were un-employed, many hundreds of thousands more hoping they will stay employed, the big industrialists who were hoping against a communist revolution and the socialists who were also hoping against a communist revolution, they all turned towards the Nazi party to help them. This led to growing support. With all this support, the Nazi party gradually gained seats in the Reichstag over the years. Nazi support grew in direct correlation with the un-employment figures in Germany, this shows how much the people turned towards extremist parties in these times of trouble. Hitler got his word out by a huge use of propaganda. One of his main sources of propaganda was the SA. The SA helped protect Nazi party meetings, disrupted opposing party meetings and went around beating up communists in the streets. The police all turned a blind to these actions. This helped turn votes over, because of the way that the SA showed great discipline in the time of trouble and chaos form 1930-33. ...read more.

So Hindenburg took a risk. He gave Hitler the position of chancellor in the hope that he could control him and the affairs over Germany. This was on the 30th January 1933, the day Hitler came to power. The reason I believe to be the most important in Hitler's rise to power, is that the Weimar constitution wasn't a strong enough structure to base government around. As a consequence of the constitution, between 1919 and 1933, there were 20 different governments who had power at some stage. Also due to the constitution, inside the Reichstag, there were 28 different parties who had seats. In turn, this led to political chaos and uncertainty. This political climate, coupled with the German populations disillusionment, led Hitler and the Nazi party to get into power more quickly. The Nazi's also had a very powerful propaganda machine, with almost unlimited funding by the major companies around Germany. This was headed by Goerbells. I also believe that the Wall Street Crash facilitated Hitler's rise to power, but the real reason behind his "success" can be found by looking back through history, to post WWI Germany. The economic status of the country, the disillusionment of its people in losing the Great War and the weak political constitution following WWI, I believe were the main reasons why a charismatic, determined dictator was able to establish himself as leader. ...read more.