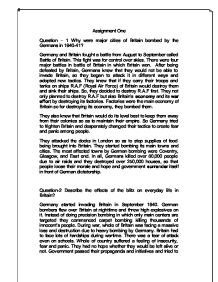 Why were major cities of Britain bombed by the Germans in 1940-41?

Assignment One Question - 1 Why were major cities of Britain bombed by the Germans in 1940-41? Germany and Britain fought a battle from August to September called Battle of Britain. This fight was for control over skies. There were four major battles in battle of Britain in which Britain won. After being defeated by Britain, Germans knew that they would not be able to invade Britain, so they began to attack it in different ways and adopted new tactics. They knew that if they carry their troops and tanks on ships R.A.F (Royal Air Force) of Britain would destroy them and sink their ships. So, they decided to destroy R.A.F first. They not only planned to destroy R.A.F but also Britain's economy and its war effort by destroying its factories. Factories were the main economy of Britain so for destroying its economy, they bombed them. They also knew that Britain would do its level best to keep them away from their colonies so as to maintain their empire. So Germany tried to frighten Britain and desperately changed their tactics to create fear and panic among people. They attacked the docks in London so as to stop supplies of food being brought into Britain. They started bombing its main towns and cities. The most affected towns by German bombing were Coventry, Glasgow, and East end. In all, Germans killed over 60,000 people due to air raids and they destroyed over 250,000 houses, so that people loose their morale and hope and government surrender itself in front of German dictatorship. Question-2 Describe the effects of the blitz on everyday life in Britain? Germany started invading Britain in September 1940. German bombers flew over Britain at nighttime and threw high explosives on it. Instead of doing precision bombing in which only main centers are targeted they commenced carpet bombing killing thousands of innocent's people. During war, whole of Britain was facing a massive loss and destruction due to heavy bombing by Germany. ...read more.

Source D is a primary source because it has been taken in 1940. It mainly supports the evidence of Source B because it shows damage done to civilian morale and distress to ordinary people. It also mostly supports B because it was censored for a time. Even though it is not as shocking as Source B it still had the potential to reduce morale. This is shown in Source D where I think it shows a man looting somebody else possessions and another man pointing at him accusing him of doing so. Regardless of the fact whether this man is genuine or not, Source D still shows damage and devastation as a result of bombing. Sources B and C do support this but the extent of the damage is much worse in Source D and Source B as people are not prepared to stand around and smile after their houses and possessions after they had been wrecked. All the Sources tell us different things about the air raids. Source C shows morale was high at the beginning of the Blitz but after two months we can see in Source D that the bombing was continuing and Source B shows us that the bombing went on for a long time, over three years, not just months as many people at the time had thought. I think that Source C does not really support Source D as Source C is a pose photograph and was released as propaganda to keep up morale. I think Sources B and D show reality and what was really going on at the time I think that is why they were censored because the photographs would show the destruction that the government had would want to conceal from the public eye as it could destroy the cooperation of the British people. Sources D and B are different though because they show damage done to different kinds of people being affected but as a hole this shows us that anybody could be affected by the Blitz. ...read more.

Where people's homes had been damaged and other people went and took their stuff which is shown in Source D. This shows that some people took advantage of other peoples unfortunate situations and that some people were committing very selfish acts. A reason to suggest that the statement in itself is a myth is that many people were willing to accept evacuees and many of those were treated well and that the true state of the children from the inner cities became widely known. But children were not always well treated and some families just accepted children because they needed the money which was to be given by the government. This is a serious case of children being ill treated and I can guarantee that there was more like it. This shows that people used evacuation as a chance to gain extra money but that wasn't always the case and that some people may have enjoyed helping others out. Another cause to suggest that the statement is false is that people made do because they knew there was little alternative. There was no major civil disturbances, people were not rioting or demonstrating this suggests that people endured the hardships of the war because they knew that some good would come out of it at the end of the war. Another reason to suggest that these people were brave and united is that there were a lot of volunteer groups. These people were not paid they just genuinely wanted to help others. There were people who joined the ARP, they made sure that people were safe at night and made sure that people obeyed the blackout regulations. There were The AFS, The Auxiliary Fire Service who were volunteers who supported the Fire Service. These people risked there lives to help and save others. So, Overall I cannot properly say that whether I agree with the statement or not because people did carry on with their lives and were brave and united but there were also cases of people being self-centred and not caring about how their actions will affect others. ...read more.