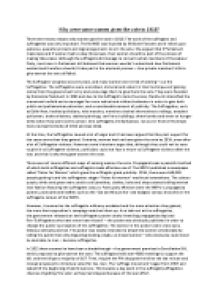 ﻿Why were some women given the vote in 1918? There were many reasons why women got the vote in 1918. The work of the suffragists and suffragettes was very important. The NUWSS was founded by Millicent Fawcett and it relied upon patience, peaceful protests and logical arguments to win the vote. She argued that if Parliament made laws and if women had to obey those laws, then women should be part of the process of making those laws. Although the suffragists did manage to convert certain members of the Labour Party, most men in Parliament still believed that women wouldn't understand how Parliament worked and therefore shouldn't take part in the electoral process ? thus private members' bills to give women the vote all failed. The Suffragists' progress was very slow, and many women were tired of waiting ? cue the Suffragettes. The suffragettes were uncivilised, immoral and violent in their techniques of gaining notice from the government to try and encourage them to give them the vote. ...read more.

The colours purple, white and green were used to sell jewellery, clothes, belts and shops started selling women new fashion featuring the suffragette colours. Particulary effective were the WSPU?s propaganda posters, postcards and leaflets such as the ?Cat and Mouse Act? and badged, various brooches in the suffragette colours of the WSPU. However, it seemed as the suffragette militancy escalated and the more attention they gained, the more their opposition?s campaign matched them up. As a lash-out at the suffragettes, the government released an anti-suffragette poster clearly intending propaganda depicted five ?Suffragettes who have never been kissed? ? the poster was obviously published in order to change the public?s perception of the suffragettes. The women in the posters were cross-eyes, hideous old tacky women. The poster was clearly intended to attack the women emotionally by telling the public that only disgusting-looking, single, un-kissed women ? who obviously could never be desirable to men ? became suffragettes. ...read more.

This defeated the previous argument against women?s suffrage that women did not serve their country and so should not vote. Thus, women were enfranchised partly by a nation grateful for their contribution to Britain?s victory in the First World War. Furthermore, women had demonstrated their resourcefulness, convincing some who opposed women?s suffrage that they deserved the vote. Public opinion had changed, becoming more favourable towards women?s suffrage. Land girls had helped to change women?s fashion, by wearing trousers, while doing valuable work for their country. Thus, women began to wear shorter skirts and became more independent, earning their own wages during the war. This signalled a change in social attitude as women were becoming more equal with men and so deserved the same rights. The problem with this argument is that only women who were householders over the age of 30 gained the right to vote in 1918, whereas the 1918 Representation of the People Act gave the vote to all men over the age of 21 so the war did not necessarily bring women equality. ...read more.