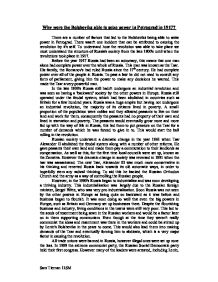 Why were the Bolsheviks able to seize power in Petrograd in 1917?

Why were the Bolsheviks able to seize power in Petrograd in 1917? There are a number of factors that led to the Bolsheviks being able to seize power in Petrograd. There wasn't one incident that can be attributed to causing the revolution by it's self. To understand how the revolution was able to take place we must understand the structure of Russia's society from the late 1800's until when the revolutions took place in 1917. Before the year 1917 Russia had been an autocracy, this means that one man alone had complete power over the whole of Russia. This man was known as the Tsar. His family, the Romanov's had ruled Russia since the 17th century. He had complete power over all of the people in Russia. To pass a law he did not need to consult any form of parliament, giving him the power to make any decisions he wanted. This made the Tsar a very powerful man. In the late 1800's Russia still hadn't undergone an industrial revolution and was seen as having a 'backward' society by the other powers in Europe. Russia still operated under the feudal system, which had been abolished in countries such as Britain for a few hundred years. Russia was a huge empire but having not undergone an industrial revolution, the majority of its citizens lived in poverty. A small proportion of the population were nobles and they allowed peasants to live on their land and work for them, consequently the peasants had no property of their own and lived in starvation and poverty. ...read more.

Under enormous pressure the Tsar backed down and gave concessions to the workers starting by setting up a parliament, known as the Duma, which was set up in 1905 and eventually lasted until 1917. Following more strikes by the workers the Tsar is forced to make more concessions, such as the allowance of trade unions and official political parties being set up. Another revolution in the December of 1905 came to nothing and only really succeeded in the setting up of the Duma, which was virtually powerless anyway. Despite elections being held by the Duma the country was still an autocracy, which consequently still meant the Tsar had the power to over rule any decisions made, which is exactly what he did. In the first two elections, the resulting parties proved too extreme so the Tsar dissolved the elections. So the Duma was worthless if the Tsar could just dissolve the elections if he didn't like the result. The Prime Minister at the time was called Stolypin, he suggested that the system was changed so that the people can vote. The result of which means a Conservative Party is voted in. At this time a number of extreme parties were banned by the Tsar and made illegal, this meant that Lenin was again forced to flee the country as the Bolsheviks were included in this. Stolypin then began to make a number of reforms including agricultural and land ownership reforms. ...read more.

In my opinion the two most important factors in allowing the Bolsheviks to seize power are the effects of the First World War and the unpopularity of the provisional government. If either of these did not happen then it is quite possible that there would never have been a revolution by the Bolsheviks. If I had to choose one then it would be the effects of the First World War because this made the working and living conditions worse which made the people force the Tsar to abdicate which gave the provisional government which made the people revolt against it. Also indirectly if there had been no war then perhaps Lenin would not have got back into Russia because the only reason that the Germans helped him get back was because they correctly thought he would create havoc in Russia and thus make Russia to surrender to Germany. But having considered all of the possible factors in allowing the Bolsheviks to power I have to conclude that the factors all pieced together in one big chain. Without one of the factors it may not have happened. However I believe that it was inevitable that a revolution would take place, it was just a matter of who would seize the chance, which is what the Bolsheviks did. They did not need to use hardly any force to take over the city, nor was there a great number of Bolshevik supporters in Russia, they were just the ones that acted most swiftly, under the expert guidance of Lenin. Sam Tiernan 11SM ...read more.