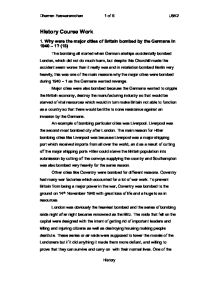 History Course Work 1. Why were the major cities of Britain bombed by the Germans in 1940 - 1? (15) The bombing all started when German airships accidentally bombed London, which did not do much harm, but despite this Churchill made the accident seem worse than it really was and in retaliation bombed Berlin very heavily, this was one of the main reasons why the major cities were bombed during 1940 - 1 as the Germans wanted revenge. Major cities were also bombed because the Germans wanted to cripple the British economy, destroy the manufacturing industry so that would be starved of vital resources which would in turn make Britain not able to function as a country so that there would be little to none resistance against an invasion by the Germans. An example of bombing particular cities was Liverpool. Liverpool was the second most bombed city after London. The main reason for Hitler bombing cities like Liverpool was because Liverpool was a major shipping port which received imports from all over the world, and as a result of cutting off the major shipping ports Hitler could starve the British population into submission by cutting off the convoys supplying the country and Southampton was also bombed very heavily for the same reason. Other cities like Coventry were bombed for different reasons. Coventry had many war factories which accounted for a lot of war work. ...read more.

The people who did not trek out into the country side would have stayed in air raid shelters, either public ones or ones they had built themselves, or they would have squeezed into the railway station, as this was a place underground away from raids and was also a place to commute. There were two main types of air raid shelters: the first was Anderson and the other was named Morrison. The two were made from corrugated steel which bowed in the middle and were fixed together with high density bolts, the main structure of the building was dug two metres underground which sufficed for most sheltered victims. After the main part if the shelter was laid down it was covered by on average forty centimetres of mud and soil, which would help disguise the shelter and would decrease the possibility of it being hit. The use of shelters practically forced people out of their houses which would be quite a hindrance. When they were released around 500,000 shelters were distributed by the end of the year and the use of shelters helped to decrease the amount of Londoners staying in the underground which bode well for the government as one town had its underground bombed which caused a massacre which showed that the underground stations were all too easy to destroy, although this happened the government covered it up well and as there were less people in the underground it meant that the fear of another massacre occurring again was practically eliminated. ...read more.

The king and queen deciding not to send their daughters away as part of the evacuation programme, and themselves to stay in the country also served as positive propaganda, really showing the country that the king and his family were fully committed to serving their country and not leaving at the first sight of danger. A highly successful piece of propaganda used by the government was one to promote the germination of carrots. There was a short supply of food and the country needed all the extra food it could obtain. In order to get more farmers and people living in the country side to grow more carrots, the government began a highly successful campaign stating that carrots would help you see in the dark. This increased the production of carrots immediately, because with the current blackout, people wanted to believe that they would be able to see in the dark. This is definitely a worthy form of propaganda, as many people still believe and tell this myth today. For much of the war there was support for the government and determination to win but at times there was fear and apprehension. Some people may have felt more negative about the war and the government, but a lot of the bad news was kept hidden from the people and the government encouraged positive propaganda to keep morale up. Throughout the war the government used many forms of positive propaganda to hide the devastating effects and to prevent a negative effect on the people of Britain. ?? ?? ?? ?? Dharren Easwaramohan 1 of 5 U5K2 History ...read more.