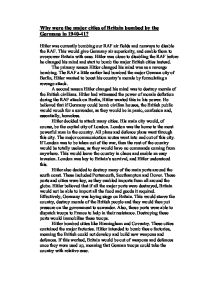 Hitler was currently bombing our RAF air fields and runways to disable the RAF. This would give Germany air superiority, and enable them to overpower Britain with ease. Hitler was close to disabling the RAF before he changed his mind and start to bomb the major British cities instead.

The primary reason Hitler changed his mind was as a revenge bombing. The RAF a little earlier had bombed the major German city of Berlin, Hitler wanted to boost his country’s morale by formulating a revenge attack.

A second reason Hitler changed his mind was to destroy morale of the British civilians. Hitler had witnessed the power of morale deflation during the RAF attack on Berlin, Hitler wanted this in his power. He believed that if Germany could bomb civilian houses, the British public would vouch for a surrender, as they would be in panic, confusion and, essentially, homeless.

Hitler decided to attack many cities. His main city would, of course, be the capital city of London. London was the home to the most powerful man in the country. All plans and defence plans went through this city. The major communication routes went into and out of this city. If London was to be taken out of the war, then the rest of the country would be totally useless, as they would have no commands coming from anywhere. This would leave the country in chaos and enable an easy invasion. London was key to Britain’s survival, and Hitler understood this.

Hitler also decided to destroy many of the main ports around the south coast. These included Portsmouth, Southampton and Dover. These ports and cities were key, as they enabled imports from all around the globe. Hitler believed that if all the major ports were destroyed, Britain would not be able to import all the food and goods it required. Effectively, Germany was laying siege on Britain. This would starve the country, destroy morale of the British people and they would then put pressure on the government to surrender. Also, these ports were able to dispatch troops to France to help in their resistance. Destroying these ports would immobilise these troops.

Hitler bombed cities like Birmingham and Coventry. These cities contained the major factories. Hitler intended to bomb these factories, meaning the British could not develop and build new weapons and defences. If this worked, Britain would be out of weapons and defences once they were used up, meaning that German troops could take the country with relative ease.

Hitler also decided to bomb cultural and historic cities like Canterbury. Hitler believed that the British people would do anything to protect their heritage. If many cathedrals and national trust sites get bombed, the British morale would deplete and they would give up their effort at resistance. This again would put pressure on the government to surrender.

Hitler had the idea that bombing these cities would create a variety of affects, all of them would lead to civilian pressure on the government to surrender. As long as British morale and spirit remained intact, then Britain would not surrender and keep putting up resistance. The only way to break their morale and spirit was to go by the air as Britain had among the best Coastal Defences and by far the best Navy in the world. The only way to capture Britain was from the air, and if Hitler had kept bombing the RAF air bases and airstrips, then the RAF would have been out of the count. This would give Germany air superiority allowing an easy invasion. Hitler believed the reasons above were more important as Hitler believed that a surrender would suit him better than wasting men on an invasion.

The British reacted with confidence and the bombings didn’t lower their morale. This allowed the country to keep fighting and putting up resistance.