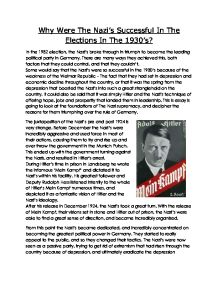 Why Were The Nazi's Successful In The Elections In The 1930's? In the 1932 election, the Nazi's broke through in triumph to become the leading political party in Germany. There are many ways they achieved this, both factors that they could control, and that they couldn't. Some would say that the Nazi's were so successful in the 1930's because of the weakness of the Weimar Republic - The fact that they had set in depression and economic decline throughout the country, or that it was the spring from the depression that boosted the Nazi's into such a great stranglehold on the country. It could also be said that it was simply Hitler and the Nazi's technique of offering hope, jobs and prosperity that landed them in leadership. This is essay is going to look at the foundations of The Nazi supremacy, and decipher the reasons for them triumphing over the rule of Germany. ...read more.

The new found organization of the Nazi's was incredible. Remembering that many Nazi's had been soldiers in WW1, and brought about the level of obedience as they had been used to in the trenches. This meant that Hitler was able to organize public speaking classes for his Nazi's, affecting the way they delivered themselves to the public, and how they portrayed the Nazi image. As well as the Nazi population spreading the memorandum of themselves, Hitler also organized the implausible and renowned propaganda that the Nazis are still recognized for today. Hitler put together a huge propaganda machine, for he had experience in the propaganda field to try and attract the people of Germany to vote for him. His posters included the anti-communist (above) and anti-semitic message that at the time, many Germans found appealing. As time moved on and the Nazis kept gaining seats throughout the 1930's, there were a number of uncontrollable factors which contributed towards the Nazis coming to power. ...read more.

The SA also held people at gun point in certain voting booths to try and convince them to vote for Hitler. Hitler himself also contributed towards the Nazi popularity by just being himself. He had a very gripping personality, which the people of Germany loved. He was enforcing and took action where it was needed. He also gave great rally speeches to hundreds of people, rising an aura of patriotic spirit representing how it feels to be a Nazi supporter. I feel that the success of the Nazi's in the 1930's were a whole combination of the various things I have looked at over this essay, but for me the most dormant dynamic of the Nazi success was the change from militant to passive attitude. I feel that this greatly increased the Nazi popularity, and also allowed them to comprehend situations more effectively; giving them the time they needed to think about how their actions would affect their own status within the Reichstag, and their reputation with the German public. This is a treasure that no successful political party could afford to lose. ...read more.