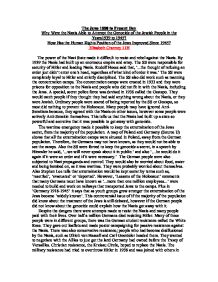 The Jews 1880 to Present Day Why Were the Nazis Able to Attempt the Genocide of the Jewish People in the Years1939 to 1945? How Has the Human Rights Position of the Jews Improved Since 1945? Elizabeth Cranney 11H The power of the Nazi State made it difficult to resist and rebel against the Nazis. By 1939 the Nazis had built up an enormous empire and army. The SS were responsible for security of Hitler and leading Nazis. Rudolf Hoess said that, '...the thought of refusing an order just didn't enter one's head, regardless of what kind of order it was.' The SS were completely loyal to Hitler and strictly disciplined. The SS also did work such as manning the concentration camps. The concentration camps were created in 1933 and they were prisons for opposition to the Nazis and people who did not fit in with the Nazis, including the Jews. A special, secret police force was devised in 1936 called the Gestapo. They would catch people if they thought they had said anything wrong about the Nazis, or they were Jewish. Ordinary people were scared of being reported by the SS or Gestapo, so most did nothing to prevent the Holocaust. Many people may have ignored Anti-Semitism because, they agreed with the Nazis on other issues, however some people were actively Anti-Semitic themselves. ...read more.

It also shows that in Auschwitz in October 1944 'Jewish Special Squad' workers killed several SS guards and escaped. In a map of Jewish Revolts from 1942-45) it shows that twenty of the ghettos and five of the death camps had been the stage of Jewish uprisings. Examples of this are in Treblinka in August 1943 and in the ghetto of Krushin in December 1942. A famous ghetto uprising happened in the Warsaw ghetto in Poland. This was headed by Mordecai Anielewicz he wrote that, 'Only a few will hold out, the rest will die, sooner or later...I had the privilege of seeing the Jewish defence...in all its greatness and glory.' 'Lessons of the Holocaust' says, '...knew they were engaged in a hopeless battle, but they were determined to give meaning to their deaths'. 'Lessons of the Holocaust' also tells that Jews only had, '...a few machine guns and rifles and a large number of grenades...' while the Nazis had, ''...heavy machine guns, howitzers, artillery and armoured vehicles...'There was not possibly enough firepower to win the battle. The map Source 16 shows that Jews even formed groups, like the Jewish partisan groups. These resisted the Nazi control, attacked and harassed German forces, this happened in places like Poland and France. The Jewish resistance did not stop the Holocaust because; there were not enough instances altogether. ...read more.

The same thing happened in Italy. In Britain in 1990, after Jewish cemeteries were vandalised and not reported many people were worried. Jo Wagerman head teacher of a Jewish school said, 'We will never be able to say it's all right, it can't happen again. There will be watchfulness always.' However, the Manchester Jewish Council said, 'If the French cemetery attack had not been given such ...media coverage, there would not have been copy cat daubing on cemeteries here.' Reported in a teenage magazine these statistics are also worrying, in Britain 140,000 racially motivated crimes were reported to the police in 1996. By 1998 fewer than 1 in 100 of these had been prosecuted. In Germany between the years of 1990 and 1993, there were 75 reported deaths and 23,000 crimes related to fascist violence. However, the 9th of November of this year, the anniversary of Kristallnacht were thousands of Jews were attacked by the SS, a huge demo in Germany took place. The protest was against the recent outbreak of attacks against foreigners including Jews. Anti-Semitism as not gone away, the problem is still there. The fact there are still outbreaks of violence against Jews shows this, however there is progress in that most people find it horrific the actions of others against Jews. There is also progress as incidents of Anti-Semitism are reported in newspapers and articles in magazines. It has improved since 1945, but there is still a lot of progress needed. ...read more.