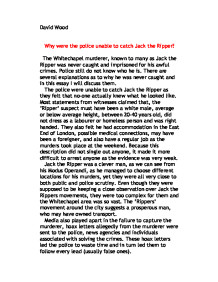 Why were the police unable to catch Jack the Ripper?

David Wood Why were the police unable to catch Jack the Ripper? The Whitechapel murderer, known to many as Jack the Ripper was never caught and imprisoned for his awful crimes. Police still do not know who he is. There are several explanations as to why he was never caught and in this essay I will discuss them. The police were unable to catch Jack the Ripper as they felt that no-one actually knew what he looked like. Most statements from witnesses claimed that, the 'Ripper' suspect must have been a white male, average or below average height, between 20-40 years old, did not dress as a labourer or homeless person and was right handed. They also felt he had accommodation in the East End of London, possible medical connections, may have been a foreigner, and also have a regular job as the murders took place at the weekend. Because this description did not single out anyone, it made it more difficult to arrest anyone as the evidence was very weak. Jack the Ripper was a clever man, as we can see from his Modus Operandi, as he managed to choose different locations for his murders, yet they were all very close to both public and police scrutiny. ...read more.

The witnesses of the 'Rippers' murders were unreliable, as nobody was able to accurately identify the 'man' seen talking to the 'Ripper' victims. Every witness's descriptions of 'Ripper' were different, which did not help the police narrow their search. Some stating he looked tall with a pale complexion, dark hair and slight moustache, aged around 28 - 35 and always wore dark clothing, but other statements were that 'Ripper' was a man aged 34 - 35, stout, clean shaven and fresh complexion. The lack of reliable witnesses slowed down the case. The Jewish message wrote in chalk found on Goulston Street, stating ''The Juwes are the men that will not be blamed for nothing''. Theories have suggested that the message was not written by the murderer and just happened to be where the killer dropped or placed the bloody piece of apron. There was also a possibility that the message was a deliberate attempt to blame the Jews and miss lead the police off the real murderer. This was the opinion of the Scotland Yard and the Jewish community. The Jewish message was rubbed off the wall later in the day. ...read more.

Another method was to post 80,000 handbills in the neighbourhood to encourage witnesses to come forward. Police also visited the common lodging houses, interviewing over 2,000 lodgers. However these methods did not seem to be working, therefore Sir Charles Warren encouraged police constables to train a group of bloodhounds and put them into action. However, there was always some doubt that with the larger number of people living in Whitechapel that a dog could be able to follow a single scent, particularly without an article of clothing from the killer, Jack. This experiment was abandoned in October. The police tracked down every lead, every suspect was questioned thoroughly, witness statements were all taken into account and the modus operandi was studied. The results were a disappointment and the police were heavily criticized. Queen Victoria did not approve, she told the Prime Minister, 'This new most ghastly murder, shows the absolute necessity for some very decided action. All these courts must be lit, and our detectives improved. They are not what they should be.' As winter come, police activity began slow. Leads came to an end. It appeared that Jack the Ripper had left the scene for good. ...read more.