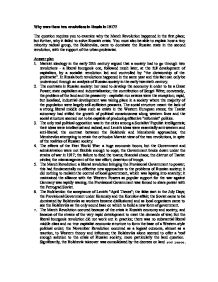 Why were there two revolutions in Russia in 1917?

Why were there two revolutions in Russia in 1917? The question requires you to examine why the March Revolution happened in the first place; but further, why it failed to solve Russia's crisis. You must also be able to explain how a tiny minority radical group, the Bolsheviks, came to dominate the Russian state in the second revolution, with the support of the urban proletariat. Answer plan 1. Marxist ideology in the early 20th century argued that a society had to go through two revolutions - a liberal bourgeois one, followed much later, at the full development of capitalism, by a socialist revolution led and controlled by "the dictatorship of the proletariat". ...read more.

3. The only real political opposition was in the cities among a Socialist/ Populist intelligentsia; their ideas were intellectual and radical, and Lenin's ideas were essentially anti-western and anti-liberal; the contrast between the Bolshevik and Menshevik approaches; the Mensheviks attempting to retain the orthodox Marxist view of the two revolutions, in spite of the realities of Russian society. 4. The effects of the First World War: a huge economic boom, but the Government and administration were not flexible enough to cope; the Government broke down under the strains of war in 1917; the failure to feed the towns; financial chaos; the distrust of Tsarist circles; the mismanagement of the war effort; desertion of troops. ...read more.

7. The March Revolution occured because of the crisis in Russia's economy and society, and because of the strains of the very rapid development to meet the demands of war; but the liberal bourgeois revolution did not work out in practice; there was no substantial liberal middle class and no true capitalist economic structure to form the base of a Western-style political order; the November Revolution occurred as a logical outcome, almost as a reaction, to Western theory and influence; the Bolsheviks alone seemed to offer a 'real' enough solution to the crisis of Russian society, more particularly the land question. Significantly, the Bolshevik takeover was consolidated by the decrees on land and peace. ?? ...read more.