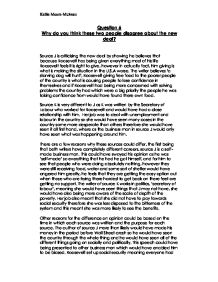 why would people disagree with the new deal?

Question 6 Why do you think these two people disagree about the new deal? Source J is criticising the new deal by showing he believes that because Roosevelt has being given everything most of his life Roosevelt feels it is right to give, however in actually fact, him giving is what is making the situation in the U.S.A worse. The writer believes 'a starving dog will hunt', Roosevelt giving free food to the poorer people of the country is what is causing people to lose confidence in themselves and if Roosevelt had being more concerned with solving problems the country had which were a big priority the people he was taking confidence from would have found there own food. ...read more.

have angered him greatly, he feels that they are getting the easy option out when those who are trying there hardest to get back on there feet are getting no support. The writer of source K works in politics, 'secretary of labour', meaning she would have seen things that J may not have, she would have also being more aware of the scale of depth of the poverty. Her job also meant that she did not have to pay towards social security therefore she was less disposed to the bitterness of the system and this meant she was more likely to see the benefits. Other reasons for the difference on opinion could be based on the time in which each source was written and the purpose for each source. ...read more.

The writer of source K would be more likely to be less bitter about Roosevelt's policies because she was immune from many of them for example the social security and as she worked with Roosevelt she would have being there when he was deciding them and her say may have had some effect on the matter. The purpose of source K was to be put in a book remembering Roosevelt, 'The Roosevelt I Knew' if you look at the time in which this book was written Roosevelt has not being dead very long therefore she is less likely to emphasise on all of Roosevelt's bad qualities as that could be seen as disrespectful, source J's speech was written in 1980, by this time Roosevelt has being dead for 35 years so it is not disrespectful to bad mouth him this would give him more freedom to express his true feelings. Kellie Moore-Mulveen ...read more.