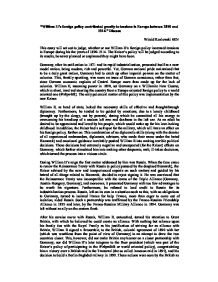 "William II's foreign policy contributed greatly to tensions in Europe between 1890 and 1914." Discuss Witold Kozlowski 6EN This essay will set out to judge, whether or not William II's foreign policy increased tensions in Europe during his the years of 1890-1914. The Kaiser's policy will be judged according to its results, however planned or unplanned they might have been. Germany, after its unification in 1871 and its rapid industrialisation, presented itself as a near model nation, being modern, rich and powerful. Yet, German national pride maintained that to be a truly great nation, Germany had to catch up other imperial powers on the matter of colonies. This, frankly speaking, was more an issue of German conscience, rather than fact, since German economic exploits of Central Europe more than made up for the lack of colonies. William II, assuming power in 1890, set Germany on a Williamite New Course, which in short, involved steering the country from a Europe oriented foreign policy to a world oriented one (Weltpoltik). The only polemical matter of this policy was implementation by the new Kaiser. William II, as head of state, lacked the necessary skills of effective and thought-through diplomacy. Furthermore, he tended to be guided by emotions, due to a lonely childhood (brought up by the clergy, not by parents), during which he committed all his energy to overcoming his handicap of a useless left arm and deafness in the left ear. ...read more.

Britain, William II signed a favourable, to the British, colonial agreement of 1890 with her (which was worthless from the point of view of Germany) in an attempt to draw the two countries closer. This, however, did not make Britain any keener on a closer partnership with Germany; nor did William II's later telegram to the Boer president (which was part of the Kaiser's policy of participating in the Weltpolitik or world oriented policy), congratulating him a victory over a British raid in the Transvaal (the so called Jameson raid in 1895), and his decision to build a Berlin-Baghdad railway in 1899. These actions were seen by the British as German interference in their sphere of influence. These events completely alienated Britain from Germany. Simultaneously, alienating Britain drew her closer to the other Powers - France and Russia. In 1904 an Anglo-Franco Entente was signed, which recognised Egypt as a British sphere of influence and Morocco as a French sphere of influence. William II had not been consulted on the matter by either of the Powers and felt left out of world affairs. He called for an international conference in Tangiers (1905) to discuss the situation of independence-stripped Morocco in an attempt to make German presence felt if only to disrupt the ameliorating relationship between France and Britain. ...read more.

After gaining approval of the nation, he set out to produce a fleet which was to be superior even to the one of Britain. Nevertheless, this fleet was nothing but a luxury, a sign of wealth and prestige of the Germans. The British, however, did not view the German amassment of ships this way; it saw it as a threat to its own navy, which pushed her into joining the Triple Entente, together with France and Russia. This British move made the division within Europe even clearer and escalated the already taut tensions even more. William II's lack of political and diplomatic skill, along with emotional guidance pushed him into making rash, provocative decisions (and short-term ones to that) all in the aim of satisfying his people with a 'great' Germany. His desperate need of fulfilling this mission, through short-sighted and ill-thought-through decisions, presented Germany as a negative diplomatic partner (Italy siding with the Franco-British camp) and moreover a dangerously unpredictable one (the British had no idea what William II wanted to achieve through the sudden build-up of the navy), along with the alienation of almost every Great Power, stimulated the other countries to unite against the potential threat. This swift unification of three of the Great Powers is proof enough (especially of the ever reluctant Britain to involve itself in European affairs) of elevated tensions caused by William II. ...read more.