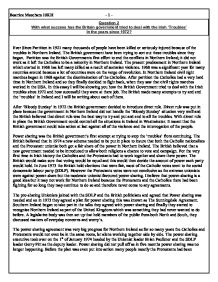 With what success has the Britain government tried to deal with the Irish Troubles in the years since 1972?

Only a few had confidence that the agreement may help they were the SDLP and a moderate unionist group who consisted of both Catholics and Protestants called the Alliance. Both extreme Nationalists and Protestants still caused distress and sorrow in the Britain and all over the United Kingdom. The Killings in Ireland rocketed through the roof and continued too into the early 90s. I believe that the Anglo-Irish agreement failed because so many people in Ireland where against it and therefore it was not a good plan as half the people did not believe it would help their country. People were happy and optimistic when the new British Prime Minister John Major arrived. A lot of people in Northern Ireland were just hoping for a quick change and they wanted peace for a change. Thousands of people stood up for their beliefs on making Ireland a more peaceful place and joined in with peace rallies all around Ireland. There was a sudden urgency for peace as it pointed out in statistics that in one generation there would be a catholic majority in Northern Ireland; therefore they needed to act quickly to gain peace. Peter Brooke believed that the British remained in Northern Ireland because the majority of its population wanted them to. The British were worried that trouble may be caused if there was a catholic majority and wanted the British out of Ireland so that the North and South could reunite and become one country again. The Downing Street Declaration was then issued in December 1993. This was a breakthrough the declaration stated that talks would be set up to decide on a new government for Northern Ireland. Groups that rejected violence would be the only ones allowed to have their say in these talks, this way peace could be found. The British government assured Northern Ireland that they had 'no selfish, political, or economic interest in Northern Ireland' but that they were only concerned with the wellbeing and safety of its people. ...read more.

I believe that all the attempts were made as a way to try and help the Irish but some of them ended up causing more anger and disagreement. The nationalists and unionists had fought against each other for so long and the English government tried to push them to work together and this would never really worked, the killings and shootings were horrible and many people lost their lives but the British government had no way of stopping the Irish feeling the way they felt towards the two religions. Although the attempts did eventually end most of the attacks (Ireland still has a few problems) during the process of trying to gain a more peaceful country, many deaths and injuries were the result of the anger produced when the British government tried to help. Since 2007 there have been very little problems in Ireland, which shows that the attempts at gaining peace finally did pay off. I believe that the last attempt in 2007 of bringing in ministers from both sides showed Ireland that they could live in peace and that the fighting was not necessary. I believe that the Good Friday agreement should last a long time and hopefully eventually the few problems they still have can be sorted out. In ten years time I hope that Ireland can continually work together as one country. I hope that eventually any disagreements between the Catholics and the Protestants will be cleared and so in ten years time they could work together like there is no difference between them, I hope that the fighting and violence can be all forgotten because of all the death and destruction that has happened in the past it would be terrible for Ireland to sink back into the pattern of death and destruction after all these years, free without war. ?? ?? ?? ?? - 1 - Beatrice Meecham 10KH ...read more.