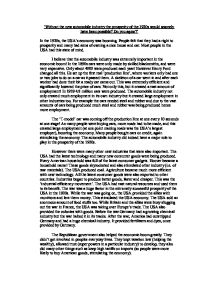 'Without the new automobile industry the prosperity of the 1920s would scarcely have been possible? Do you agree?'

'Without the new automobile industry the prosperity of the 1920s would scarcely have been possible? Do you agree?' In the 1920s, the USA's economy was booming. People felt that they had a right to prosperity and many had aims of owning a nice house and car. Most people in the USA had this state of mind. I believe that the automobile industry was extremely important in the economic boom! In the 1890s cars were only made by skilled blacksmiths, and were very expensive. Only about 4000 were produced each year/ However Henry Ford changed all this. He set up the first real 'production line', where workers only had one or two jobs to do on a car as it passed them. ...read more.

Many people bought cars on credit, again stimulating the economy. The automobile industry did indeed have a major role to play in the prosperity of the 1920s. However there were many other new industries that were also important. The USA had the latest technology and many new consumer goods were being produced. Every American household was full of the latest consumer gadgets. Hoover became a household name! These goods skyrocketed and also stimulated other industry (i.e. of raw materials). The USA produced coal. Agriculture became much more efficient with new technology. All the latest consumer goods were also exported to other countries. Industries began to produce better goods, faster and cheaper. This was the 'industrial efficiency movement'. ...read more.