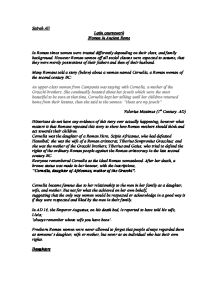 Sairah Ali Latin coursework Women in Ancient Rome In Roman times women were treated differently depending on their class, and family background. However Roman women off all social classes were expected to assume, that they were merely possessions of their fathers and then of their husband. Many Romans told a story (below) about a woman named Cornelia, a Roman woman of the second century BC: An upper-class women from Campania was staying with Cornelia, a mother of the Gracchi brothers. She continually boasted about her jewels which were the most beautiful to be seen at that time, Cornelia kept her talking until her children returned home from their lessons, then she said to the women: "these are my jewels" Valerius Maximus (1st Century. AD) Historians do not have any evidence of this story ever actually happening, however what matters is that Romans repeated this story to show how Roman mothers should think and act towards their children. Cornelia was the daughter of a Roman Hero, Scipio Africanus, who had defeated Hannibal; she was the wife of a Roman aristocrat, Tiberius Sempronius Gracchus; and she was the mother of the Gracchi brothers, Tiberius and Gaius, who tried to defend the rights of the ordinary Roman people against the Roman aristocracy in the late second century BC. ...read more.

It was usually a great advantage in politics because the men from each family could rely on each other's support in elections and debates. Roman women, however, were expected to accept their role and to forge a working relationship with their husbands: Many married Roman men were unfaithful to their wives, and had various affairs in secret with their slave girls. If their wives were to find out by any chance they were expected to turn a blind eye to the situation. Tertia Aemilia, the wife of Africanus and the mother of Cornelia was such a kind tolerant woman that, although she was well aware that her husband was having an affair with a slave-girl, she completely ignored the fact. She could not have harboured much of a grudge because, after Scipio' s death, she set the slave girl free and allowed her to marry one of her own ex-slaves. Sometimes such marriages did result in love, but Roman writers most frequently describe love between young men and their girlfriends, or between married men and women who are not their wives, rather than between husband and wives. ...read more.

Tacticus, the Roman historian seems to be criticising this custom, when he describes pasterns of infants care among the Germans: Every (German) mother breastfeeds her baby and does not hand over the task to slave-girls or wet-nurses. Tacticus, Germania 20 (1st Century. AD) Lovers, prostitutes, and concubines Women in religion Women could reach important positions in the sate religion. The following inscriptions show how a priestess achieved a high status. Eumachia was a public priestess in Pompeii in the first century AD. She was the patroness of the guild of fullers (dyers and cleaners), a very influential trade-guild in the city. She inherited a fortune from the father, who ran a brick-making business, and this allowed her to marry into an establishment Pompeian family. Eumachia, daughter of Lucius, public priestess, in her own name and that of her son, Marcus Numistrius Fronto, built with her own funds the porch, covered passage and colonnade, and dedicated them to Concordia Augusta and to Pietas. Inscription over the Entrance to the Headquarters of the Guild of fullers. (1st Century AD.) To Eumachia, daughter of Lucius, public priestess, the fullers dedicated this statue. On the Base of Eumachia's statue (1st Century AD). Eumachia, daughter of Lucius, build this for herself and for her. On her Tomb outside the Nuceruan Gate (1st Century AD) ...read more.