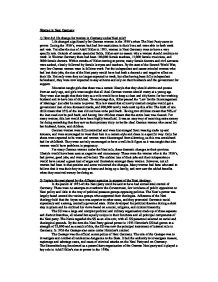 Women in Nazi Germany 1) How did life change for women in Germany under Nazi rule? Life changed significantly for German women in the 1930's when The Nazi Party came to power. During the 1920's, women had had few restrictions in their lives and were able to both work and vote. Yet after the rise of Adolf Hitler in 1933, women in Nazi Germany were to have a very specific role. Outside of certain specialist fields, Hitler saw no reason why a woman should continue to work. In Weimar Germany there had been 100,000 female teachers, 13,000 female musicians, and 3000 female doctors. Within months of Hitler coming to power, many female doctors and civil servants were sacked, closely followed by female lawyers and teachers. By the start of the Second World War, very few German women were in fulltime work. For the independent and career-minded women who had lost their jobs, the rise of the Nazi party would have had both a dramatic and negative affect on their life. Not only were they no longer expected to work, but after having been fully independent beforehand, they were now expected to stay at home and rely on their husbands and the government for support. Education taught girls that there was a certain lifestyle that they should admire and pursue from an early age, and girls were taught that all ideal German women should marry at a young age. ...read more.

These parties were several of the most successful in increasing the Nazi's power in Germany. Their effectiveness was based around the fear and violence that they created amongst society, and all three of the organisations used extreme violence in order to create intense fear amongst German citizens. The Hitler Youth was a paramilitary organisation of the Nazi Party that existed from 1922 to 1945 and had the basic motivation of training future soldiers who would serve the Third Reich faithfully. Training took precedence over academic and scientific education in Hitler Youth organisations learned to use weapons, built up their physical strength, learned war strategies, and were indoctrinated in anti-Semitism. Membership to Nazi Youth Movements was soon made compulsory. To reinforce the Nazi ideology from an early age, all school curriculum's were changed to contain what the Nazi's saw as the main needs. Hitler realised very quickly that an easy way to gain support and therefore further increase his power would be by educating Germany's youth with Nazi policies. Children were given anti-Semitic propaganda in order to completely indoctrinate them. These clever tactics meant that The Hitler Youth was a highly effective agency that increased both the power and the popularity of the Nazi party. The Church in Nazi Germany was subjected to as much pressure as any other organisation in Germany. ...read more.

Not only were they accomplishing their duties, but were being rewarded for doing so. After the Wall Street Crash occurred in 1929, poverty levels increased rapidly in Germany, and the German mark became worthless. When the Nazis came to power, unemployment levels decreased, and monetary incentives were given to families for having children. For people that had been previously despairing over the economic problems, the Nazis gave hope for many people, and to certain women these changes could be nothing other than positive. Although it can be argued that the Nazis created some positive changes in for women in Germany, it is evident that that their policies overall had a negative affect on the lives of women. Hitler dismissed and ignored all of the achievements that women had accomplished during the Weimar Republic, and instead manipulated people in order to increase his own power. Women were unable to oppose the Nazi policies, and simply had to accept their new roles as a housewife and mother. Every aspect of their lives were restricted and controlled, and any freedom and power that women had once had quickly diminished. Some women were never even given the chance to comply with these policies, and instead faced the Nazis sinister anti-Semitic ideologies, as an estimated three million Jewish females were murdered by the Nazis. ...read more.