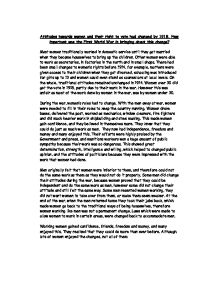 Attitudes towards women and their right to vote had changed by 1918. How important was the First World War in bringing about this change? Most women traditionally worked in domestic service until they got married when they became housewives to bring up the children. Other women were able to work as secretaries, in factories in the north and in small shops. There had been small changes to women's rights before 1914, for example, mothers were given access to their children when they got divorced, schooling was introduced for girls up to 13 and women could even stand as counsellors at local levels. On the whole, traditional attitudes remained unchanged in 1914. Women over 30 did get the vote in 1918, partly due to their work in the war. However this was unfair as most of the work done by women in the war, was by women under 30. ...read more.

Some men did change their attitudes during the war, because women proved that they could be independent and do the same work as men, however some did not change their attitude and still felt the same way. Some men resented women working, they did not want women to take over from them, or make them seem weaker. At the end of the war, when the men returned home they took their jobs back, which made women go back to the traditional ways of being housewives, therefore women working like men was not a permanent change. Laws which were made to allow women to work in certain areas, were changed back to accommodate men. Working women gained confidence, friends, freedom and money, and many enjoyed this. They realised that they could do more than ever before. Although lots of women enjoyed the changes, not all of them Rachel Kindler 10A changed their attitude and many returned to being housewives after the war without any fuss. ...read more.

The war was an excuse to give women the vote. MP's like Asquith did not want to be seen to be giving into the violent tactics of the Suffragettes. Britain was also behind other countries, as many had already given women the vote and we could not possibly have lagged behind. By 1914, the Suffragists were winning the vote anyway, although it was gradual, they were making progress and would have probably eventually won the vote without the war. On the other hand, the war did help women win the vote because it made society more democratic, everyone worked and suffered together, and therefore everyone should be treated equally. It made women more self-confident and proved all old arguments about women's role in society wrong. Overall, I believe that the war did help to gain the vote, however I also believe that women would have won the vote eventually without it because of their campaigns, and men were running out of excuses not to grant it. ...read more.