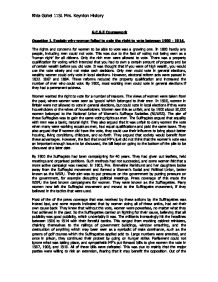 G.C.S.E Coursework Question 1. Explain why women failed to gain the right to vote between 1900 - 1914. The rights and concerns for women to be able to vote was a growing one. In 1800 hardly any people, including men could not vote. This was due to the fact of voting not being seen as a 'human right' for all citizens. Only the rich men were allowed to vote. There was a property qualification for voting which intended that you had to own a certain amount of property and be of certain wealth before you did vote. It was thought that if you were of high wealth, you would use the vote wisely and not make rash decisions. Only men could vote in general elections, wealthy women could only vote in local elections. However, electoral reform acts were passed in 1832. 1867 and 1884. These reforms reduced the property qualification and increased the number of men who could vote. By 1900, most working men could vote in general elections if they had a permanent address. Women wanted the right to vote for a number of reasons. The views of women were taken from the past, where women were seen as 'goods' which belonged to their men. In 1900, women in Britain were not allowed to vote in general elections, but could vote in local elections if they were householders or the wives of householders. Women saw this as unfair, and by 1900 about 50,000 women belonged to the National Union of Women's Suffrage Societies (NUWSS). ...read more.

Queen Victoria was one of these where she said that ' With the vote, women would become the most hateful, heartless, and disgusting of human beings. Where would be the protection which man was intended to give to the weaker sex?'. Another woman who was against the vote was Marie Corelli who claimed that 'women were and are destined to make voters, rather than to be voters themselves'. Herbert Asquith who was Prime Minister was not convinced that politics would gain by giving the right for women to vote. His view of them was contemptuous, and he continued to look upon them in a downward manner. He believed that women did not know enough about politics, that women may vote for a different party for example, the conservatives and that women would not be able to fend for their husbands if they were given more rights. The WSPU's campaign was something totally new. When women took to the street to protest many men were shocked. They still expected women to be quiet and obedient 'seen and not heard'. However, the press did take much notice, and this made an impressionable and important topic to be discussed and for the problem to be overcome. Parliament was forced to debate the situation over again and again. Each time that this happened, the Suffragettes mounted a demonstration where many got arrested and enforced hunger strikes. However in May 1911, a Conciliation Bill was passed, which the massive majority of 167. The Government announced that it would produce the bill the following year. ...read more.

They believe that it just made MP's doubt that women were capable of holding a parliamentary vote sensibly and that they could have had the vote much earlier. However, attitudes after the war did change slightly as people knew that women were capable of doing significant roles. However women unemployment rose as men came back to claim their old jobs. Women's wages were only half of those compared to men, even if they were doing the same work. Trade unions continued to oppose greater working opportunities for women because they were threat to men's work and wages. People still referred to "men's" and "women's" jobs. Nevertheless, women did press on, and other changes were introduced, such as better advice for women needing contraception. Women were still not viewed as equals to men, only women over the age of 30 gained the right to vote. They were not on equal terms with men until 1928. This was until the government were sure that women would take this seriously, almost like a trial period. To conclude, the factor that World War One had impact on the votes for women was significant, however it was not the only factor that helped women gain the vote. Other important dynamics included the Suffrage movement by women in the past, both which the suffragists and suffragettes concluded to, and all that they had campaigned for. The fact that the war did help the movement get on its way is true, but this would have happened either way, with or without the war. ?? ?? ?? ?? Rhia Gohel 11SL Mrs. Keynton History ...read more.