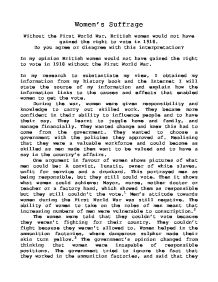 Women's Suffrage - Without the First World War, British women would not have gained the right to vote in 1918.

They couldn't fight because they weren't allowed to. Women helped in the ammunition factories, where dangerous sulphur made their skin turn yellow.3 The government's opinion changed from thinking that women were incapable of responsible positions. The government tried to ignore the fact that they worked in the ammunition factories, and said that they weren't serving their country, but they finally accepted that through this and other types of work, women were serving their country. In 1916 Prime Minister Asquith said, "What are you to do with women? I have no special desire to bring women within the franchise, but I have received a great many representations from those who speak for them", and he went on to say "[The women] fill our munitions factories, they are doing jobs which men had to perform before". He was finally admitting that women played a very important role in the war.4 Women working in an ammunitions factory Emmeline Pankhurst On 4th August 1914, England declared war on Germany. ...read more.

They became more confident in their ability to influence people and to have their say. If it wasn't for the First World War, women could not have served for their country, so the government and public would still be using "They don't serve for their country" as an excuse. The government still tried to ignore the suffragettes, but they had a crucial day looming: the general election.5 After nearly nine years of increasing militancy the women stared to win. Then the government appreciated the women serving in the war and finally gave them the vote in 1918. The incredible hard work and sacrifices and determination of the women won their right to vote, and benefited the country and its future. By Elijah Gould 3/2/04 1A postcard issued by the Suffragettes in 1910. 2War and Society in Britain 1899-1948, by Rex Pope, a historian, 1991 3Website found with Google 4A speech from Prime Minister Asquith 5Christabell Pankhurst from her memoirs, Unshackled, published in 1959 ...read more.