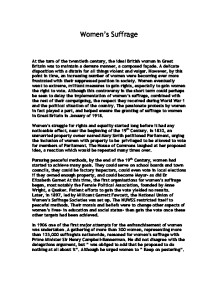 Women's Suffrage At the turn of the twentieth century, the ideal British woman in Great Britain was to maintain a demure manner, a composed fa�ade. A delicate disposition with a distain for all things violent and vulgar. However, by this point in time, an increasing number of women were becoming ever more frustrated with their suppressed position in society. Women eventually went to extreme, militant measures to gain rights, especially to gain women the right to vote. Although this controversy in the short term could perhaps be seen to delay the implementation of women's suffrage, combined with the rest of their campaigning, the respect they received during World War 1 and the political situation of the country. The passionate protests by women in fact played a part, and helped ensure the granting of suffrage to women in Great Britain in January of 1918. Women's struggle for rights and equality started long before it had any noticeable effect, near the beginning of the 19th Century. In 1832, an unmarried property owner named Mary Smith petitioned Parliament, urging the inclusion of women with property to be privileged to be allowed to vote for members of Parliament. The House of Commons laughed at her proposed idea, a reaction which would be repeated many times over. Pursuing peaceful methods, by the end of the 19th Century, women had started to achieve many goals. They could serve on school boards and town councils, they could be factory inspectors, could even vote in local elections if they owned enough property, and could become Mayor- as did Dr Elizabeth Garnet At this time, the first organisations for women's suffrage began, most notably the Female Political Association, founded by Anne Wright, a Quaker. Patient efforts to gain the vote yielded no results. Later, in 1897, led by Millicent Garrett Fawcett, the National Union of Women's Suffrage Societies was set up. The NUWSS restricted itself to peaceful methods. ...read more.

Another factor which stood in the way of women gaining suffrage was worry that men from all political parties had. If women could vote, they believed that they would vote for other women and end up in majority, again, it was an example of men fearing loss of control. Herbert Asquith from the Liberal Democrats was particularily against women gaining the vote. He thought, "Women are like candles in the wind," meaning he saw women as weak minded and easily swayed. His stereotypical view was shared by many, while he was in power he very much stood in the way of women gaining suffrage. At the time of the women's battle for enfranchisement there were many other issues that were in the eyes of the country, a priority. In the run up to World War 1 there was the growing tension with Germany, which resulted in an arms race. Ireland were fighting for home-rule, for years in Ireland there had been conflict over the ruling of Ireland, they wanted to rule themselves. Not only was this a factor which took the governments focus away from the suffragettes plea, but if the government gave into the women for using violence then it would appear that they were condoning violence. This of course could have disastrous knock on effects in Ireland, The precedent would have been set and Ireland could quite easily follow with terrible effects. There was also the matter of the coal strikes, which although may seem minor, in fact caused huge problems in many aspects of everyday life. Labourers were striking for more money, this meant that without coal there could be no cooking, cleaning or heating. Of course, no trains could run and ships were unable to sail. Also, very importantly, factories couldn't process which meant thousands of people were out of work. These pressing issues combined with the lack of support from their campaign made women's suffrage seem to be far less of a priority. ...read more.

The political situation was undoubtedly relevant in the emancipation of women. On January 10th 1918, the Reform Bill was passed by a considerable majority of 63 in British Parliament. Women had finally reached their goal. It may be thought that the sole reason that women were now granted enfranchisement was because of their work in the war, but this shallow presumption, that it was merely a reward does not take into account the many issues that together, resulted in women's suffrage .More than 70 years of women demanding the vote and the militancy of the suffragettes served as an invaluable purpose. Without these, it could be (and was before 1913) supposed that women didn't even really want the vote. The militancy destroyed this theory using the most public tool they had to hand, the press. With their violent conquests they constantly kept their cause in the papers, and the question of women's suffrage fresh in the mind of public and of parliament. The effects of women's behaviour In World War 1 were not negligible in the enfranchisement of women. They raised women in the opinion of parliament and of all the men who remained in England during war. Perhaps more importantly, some were raised in the estimations of themselves, giving many a new sense of self worth causing them to see the necessity of the vote. The militancy of the suffragettes it in my opinion the main reason why women's suffrage was achieved in 1918, although before the war it angered many and appeared to delay the process of enfranchisement. It was necessary to threaten government out of a stalemate situation and into a state of action. However, without the pressures of war, the change in voting, the difficult political situation and the initial demonstrations by the suffragists, the women of today may still not have gained the right to vote, The Women of England, by throwing off Victorian ideals, created a strong, determined identity and a new place in our ever changing society for themselves. ...read more.