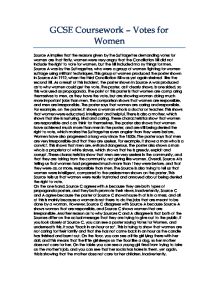 GCSE Coursework - Votes for Women Source A implies that the reasons given by the Suffragettes demanding votes for women are that firstly, women were very angry that the Conciliation Bill did not include the right to vote for women, but the Bill included many things for men. Source A was by the Suffragettes, who were a group of women fighting for women suffrage using militant techniques. This group of women produced the poster shown in Source A in 1912, when the third Conciliation Bill was yet again shelved like the second Bill. As a result of this incident, the poster shown in Source A was produced as to why women could get the vote. The poster, as it clearly shows, is one sided, so this was used as propaganda. The point of this poster is that women are comparing themselves to men, as they have the vote, but are showing women doing much more important jobs than men. The comparison shows that women are responsible, and men are irresponsible. The poster says that women are caring and responsible. For example, on the poster, it shows a woman who is a doctor or teacher. This shows that women were educated, intelligent and helpful. There is also a mother, which shows that she is nurturing, kind and caring. These characteristics show that women are responsible and can think for themselves. The poster also shows that women have achieved much more than men in the poster, and are still being denied the right to vote, which makes the Suffragettes even angrier than they were before. Women have also progressed a long way since the 1850s. The poster says that men are very irresponsible and that they are useless. For example, it shows a man who is a convict. This shows that men are, evil and dangerous. The poster also shows a man who is a proprietor of white slaves, which shows that he is greedy, exploit and corrupt. ...read more.

Using my own knowledge, I know that the women were very tired and did not have good conditions to work in the factories. Using my own knowledge, I also know that over 400 women died of TNT poisoning during the First World War. Source F is also not useful s it is showing a woman looking glamorous, after a day's work at a munitions factory. From my own knowledge, I know that working in a munitions factory would not be this easy; it was very different compared to the easy jobs that women used to do before the war. On the other hand, Source G is useful because all the figures have increased, showing the change of attitude of women towards the war. From looking at the source, it is clear that all the figures have increased, which shows that women have participated in all of the jobs that the men had left, so that they could go on and volunteer for the war. Source G is also useful because it is showing us statistics, not a poster, where it would say "enrol now". This shows that the Source is actually useful, as it is showing us the real statistics. However, on the other hand, Source G is not useful because it is from a school textbook. This means that the figures would have been simplified; rounded up or down. The Source is also not useful because it is not showing us what is happening between 1914 and 1918, is the rise steady or sudden? Source G is also not useful as it is not showing us what the women were actually doing, but they are showing us how many women are working. The Source is also limited because it is not showing us how many men are doing the jobs as well, so you cannot compare them with each other. Another reason why Source G is limited is because it is not showing us what is happening after the war, only what is happening during the war. ...read more.

You can tell that she has not been back in an hour because of the candle. Candles last much longer than an hour, so she has not been back for a long time. Looking at the child, you can see that she has not been looked after by her mother properly, as she is wearing holy socks. If you think hard, then you can notice that is a woman is not there to do her job, then the hole has would turn upside down. Indirectly and unintentionally, the poster, published by the National League for Opposing Woman's Suffrage, is showing that women are very important in everyday life, especially domestic life. From Source D, I can see that it is an extract from Emeline Pankhurst's Autobiography. In it, she says that with the violent campaigns, the women's suffrage became the news headlines. This shows that women were fighting to get the vote before the war had actually started. Source E is a picture of the Epsem Derby Race hors in 1913. This is when Emily Davison was killed. She jumped in front of the king's horse and died with fatal internal injuries. She was the first woman to die as a martyr to the cause for woman Suffrage; many men thought that if she was educated and jumped in front of a horse, then what would someone who is not educated do? In conclusion, I think that women did not get the vote because of the work that they did during the World War. This is because women had been doing campaigns long before this time. In France, women were not given the right to vote, as they had not campaigned for the right, but in England, women did and they got the vote. In my opinion, women only got the vote after the war because there was now a very good and strong reason as to why. The war just acted as a catalyst, so women would have gotten the vote anyway, but much later than they had now. ?? ?? ?? ?? ...read more.