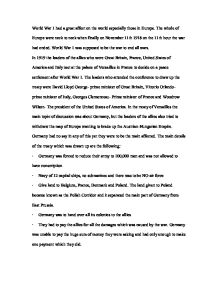 World War 1 had a great affect on the world especially those in Europe.

World War 1 had a great affect on the world especially those in Europe. The whole of Europe were neck to neck when finally on November 11th 1918 on the 11th hour the war had ended. World War 1 was supposed to be the war to end all wars. In 1919 the leaders of the allies who were Great Britain, France, United States of America and Italy met at the palace of Versailles in France to decide on a peace settlement after World War 1. The leaders who attended the conference to draw up the treaty were David Lloyd George- prime minister of Great Britain, Vittorio Orlando- prime minister of Italy, Georges Clemenceau- Prime minister of France and Woodrow Wilson- The president of the United States of America. In the treaty of Versailles the main topic of discussion was about Germany, but the leaders of the allies also tried to withdraw the map of Europe wanting to brake up the Austrian-Hungarian Empire. Germany had no say in any of this yet they were to be the main affected. The main details of the treaty which was drawn up are the following: � Germany was forced to reduce their army to 100,000 men and was not allowed to have conscription � Navy of 12 capital ships, no submarines and there was to be NO air force � Give land to Belgium, France, Denmark and Poland. ...read more.

He would provide Jobs for the people, He would provide security, He will get back all the lost territory and above all he would make Germany rich so that hyperinflation in the country would never be an issue for the Germans again. With these sort of promises anybody living in the conditions the German citizens were living in would condemn these promises. But there was a catch as always The Germans had to give up their freedom and rights. On the 30th of January 1933 Hitler had become Chancellor and for the next 12 years there was no democratic Government in Germany. Hitler had saw to it that Germany had become a 1 party state. Shortly after receiving power in 1933, the NAZI party had passed their first anti- Jewish legislation, which gave them the right to remove Jews from their homes and professions and situate them in ghettos, this was all part of the plan for the nazis as by situating these Jews in the ghettos and having them wear the star of David on their left breast or arm they were easy to find so when it was time to 'exterminate' the Jews they were found easily. In September 1935 two Nuremberg laws were passed this was a supposed law for the Protection of German Blood and German Honour. The first of these laws, known as the Reich Citizenship Law, made Jews as second-class citizens and their civil basic rights were removed. ...read more.

All this was controlled by a man called Kernel Adolf Eichman who was only 36 years of age when he had received this job. Prisoners in the concentration camps were worked to death, as slave labourers and the extermination camps was were they murdered these people in the gas chambers. The first concentration camp ever built was that of Dachau which was built in 1933. The most famous concentration camp however was Auschwitz, which was both a labour camp and extermination camp in one. About 1,300,000 people died at Auschwitz, with about 1 million of them dieing in the gas chambers. In Auschwitz and Madjenek when you arrived a doctor would be standing there and by just looking at you he would decide weather you lived or died. The ones who lived were to be worked to death. About 75 percent of people went straight to the gas ovens who included the elderly, children, the sick and people who were unable to work. In many of the camps the treatment was so harsh that thousands had died within months of arrival from hunger, disease, random killings beatings, and lack of nutrition. Finally in 1944, the allies stormed the concentration camps around Germany and Poland and rescued as many people as they can. What they saw there was to be reported as the worst thing these people had seen in their lives. The Nazi party was kicked out of office and defeated, many of the Nazi fanatics were put on trial and many had escaped. Hitler had committed suicide as with some of his other colleges. ...read more.