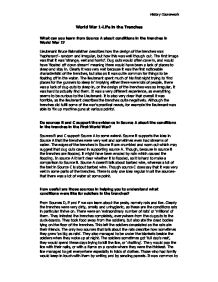 World War 1-Life in the Trenches

World War 1-Life in the Trenches What can you learn from Source A about conditions in the trenches in World War 1? Lieutenant Bruce Bairnsfather describes how the design of the trenches was 'haphazard'- random and irregular, but how this was well though out. The first image was that it was 'strange, wet and horrid'. Dug outs would often cave in, and would have 'floated off down stream' meaning there would have been a lack of places to sleep and stay in. Clearly it was very wet because it was the first noticeable characteristic of the trenches, but also as it was quite common for things to be floating off in the water. The lieutenant spent much of his first night trying to 'find places for the gunners to sleep in' implying either there were lots of people, there was a lack of dug-outs to sleep in, or the design of the trenches was so irregular, it was hard to actually find them. It was a very different experience, as everything seems to be curious to the Lieutenant. It is also very clear that overall it was horrible, as the lieutenant describes the trenches quite negatively. Although the trenches did fulfil some of the war's practical needs, for example the lieutenant was able to 'fix up machine guns at various points'. Do sources B and C support the evidence in Source A about the conditions in the trenches in the First World War? ...read more.

Also as majors are much more important and more valued they were in general treated a lot better and fed properly. Also the soldiers could have been in different places, one may have been on the front line trench, and the other may have been far away from no mans land. Possibly the people didn't get as much food on the front line trenches because it was harder to get food there. Somebody would need to risk their lives to get food there. Also the sources could have been written at different times of the war. The major's one may have been written at the beginning of the war, and the private's source may have been near the end of the war. Nearing the end of the war, there was a shortage of food. Still though, the private in the source received a fair amount of food, and enough to live on, they got milk, water and basic food. Use the sources and your own knowledge to explain what affects the war had on the morale of the soldiers and the morale of those back in England? Self- esteem of the soldiers especially, was probably quite low. Just above one in three men in the army during World War one suffered injuries, went missing or died in the UK. Most other major countries in the war suffered more than half of their men resulting in these states. The war itself was so atrocious that people would rather hurt themselves, than carry on in the war, some even killed them selves. ...read more.

But these men joined for all the wrong reasons; because their friend was joining; because somebody wanted them to; so the public wouldn't look down on them. The Public used to feel if a lad who was eligible to join the army didn't join, he was a not as worthy. A girl wouldn't want to be with a guy who was too scared to join the army, so because of this many people joined the army. Also whole communities joined as part of the promise that if you joined up together, you would fight together. If most the people in your community joined, you would feel lonely and would probably join too. Though, the war did change millions of people's lives, and affected a lot of the world. Ever person who died made some kind of contribution, everybody that died contributed to the success of the war. The people that died, died for a fitting cause. I do believe that dying in a war today, your dying it is fitting and is sweet. The men and woman who sacrifice their lives today are special. These people haven't been pressurised by the public to join, but joined because they truly wanted to. It is just as fitting to die for your country today than it was then. Wars start today on conflicts that may consequently change hundreds of thousands peoples lives. Wars start because of concerns of terrorism, gaining independence, possession of weapons of mass destruction. What makes the dying truly fitting and sweet is that they chose if they want to do it. History Coursework ...read more.