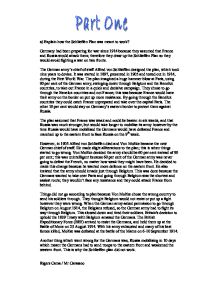 a) Explain how the Schlieffen Plan was meant to work? Germany had been preparing for war since 1914 because they assumed that France and Russia would attack them; therefore they draw up the Schlieffen Plan so they would avoid fighting a war on two fronts. The German army's chief of staff Alfred von Schlieffen designed the plan, which took nine years to devise. It was started in 1897, presented in 1905 and tested out in 1914, during the First World War. The plan imagined a huge hammer blow at Paris, using 90 per cent of the German army, swinging down through Belgium and the Benelux countries, to take out France in a quick and decisive campaign. They chose to go through the Benelux countries and not France; this was because France would have their army on the border on put up more resistance. By going through the Benelux countries they could catch France unprepared and take over the capital Paris. The other 10 per cent would stay on Germany's eastern border to protect them against Russia. The plan assumed that France was weak and could be beaten in six weeks, and that Russia was much stronger, but would take longer to mobilise its army however by the time Russia would have mobilised the Germans would have defeated France and marched up to the eastern front to face Russia on the 9th week. However, in 1905 Alfred von Schlieffen died and Von Moltke became the new German chief of staff. He made slight alliterations to the plan; this is when things started to go wrong. Von Moltke decided the army should be 60 per cent instead of 90 per cent; this was unintelligent because 60 per cent of the German army was never going to defeat the French, no matter how weak they might have been. He decided to make this change because he wanted more defence on the eastern front. ...read more.

These two sources may not be about Haig or the Battle of the Somme, however they relate to it; this means that the sources are useful to us as historians to a certain extend. Both of these sources relate to the war in different ways. The first source is a still from 'Blackadder Goes Forth', which shows two officers discussing an imminent attack on the Germans. The two officers are talking about an attack on the Germans, 'go over the top'; this means that they are going to sent men over no man's land to attack the German trenches. This tactic was used by many Marshall's however it wasn't very effective; all it caused was millions of deaths. Soldiers would be killed by ruthless machine guns as they tried to 'go over', and get into the enemy's trenches. The source also shows that the officers think their Marshall is making unintelligent decisions, 'Field Marshall Haig is about to make yet another giant effort to move his drinks cabinet six inches closer to Berlin'. The officers think that everyone is going to get killed, "You mean 'Are we all going to get killed? 'Yes", just so they can gain six inches of land. They imply that their Marshall is drunk, 'to move his drinks cabinet six inches closer to Berlin', that's why he is making these stupid decisions. From this source we have learned that Field Marshall Haig was not respected from his officers and a tactic used during the Battle of Somme, 'going over the top'. This shows that the source is of use to historians, to a certain extend. Similarly, source E is a cartoon from a British magazine, published in February 1917; just after the Battle of Somme. The source shows a major-general addressing his men before practising an attack. The major-general tells his men, 'that there is a difference between a rehearsal and the real thing', the first being 'the absence of enemy', because there will be no enemy during a practise attack. ...read more.

The general in this source says that the men had complete confidence in Haig however as historians we know this is not true because his men hated him; this source can not be trusted. Looking at all the source and evaluating if they could be trusted or not; I have come up with my conclusion. The above source supported the view, 'Haig was an uncaring general who sacrificed the lives of his soldiers for no good reason.' Haig was an uncaring general because his strategy, 'To kill more Germans that the Germans could kill his men', is murder; he risked the lives of his men for no good reason. During the battle he also made more stupid decisions, 'send men over the top', source C describes it like 'wreckage washed up on a high water mark/quite as many died on the enemy as on the ground'. This shows that his was uncaring and stupid. Source A is another very important source because it's written by Haig before the battle, in it he says 'The nation must be prepared to see heavy casualty list/ victories to be won without the sacrifice of men's lives', this shows that he never cared about his men all he wanted was victory however he didn't even manage to get that. In source J Lloyd George says that the war was only won because of the stupidity of the Germans, 'Had it not been for the stupidity of the Germans in provoking a quarrel with America, the Somme would not have saved us from a stalemate'. Using our background knowledge of the war; we know that Haig plan to bombard the Germans for eight days and then send men over the top was a failure however he carried on doing this for another four months. The British army was getting slaughtered however he did not care he carried on the attack which were also failures. This shows that Haig was an uncaring general and got his men killed unnecessarily. ?? ?? ?? ?? Rigers Cama / Mr Carassco ...read more.