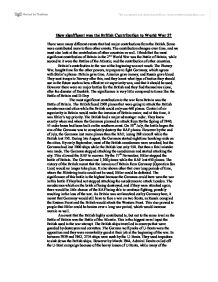 A lot of Britain's supplies came through this route so it was vital that Britain safeguarded it. In 1940 the British Forces travelled to Egypt. Firstly, they had to face the Germans that were heading east towards the Suez Canal. Although, the British had a ratio of ten German soldiers to one British soldier, they still defeated the Germans and captured many as well. After this victory in Egypt, Churchill sent many soldiers to Greece from Africa, allowing the Germans, led by Rommel, to launch a counter-attack, which pushed the British back. Fortunately, the British managed to hold themselves together. In 1942, a new leader was appointed, named Montgomery. At El Alamein, Rommel was defeated, and eventually, by 1943, the Germans had been pushed back to Italy, via Morocco, Algeria and Tunisia and this was called Operation Torch. This was quite significant because some Germans had been lost here; either killed or captured, and this also diverted some German troops from the Eastern Front to Italy. However, there are more important events that take place in this war, where many more men are lost, and more land is gained. Also, this campaign was important as the presence of the Suez Canal, allowed easier trade for the British, so Britain needed to defend it. Also, the British oil supplied came from Persia so the needed to be defended as well. Bombing was an important part of Britain's contribution to the war, but also not as important as the battles of Britain, the Atlantic, and D-Day. It was similar in significance as the North African campaign. ...read more.

Technological breakthroughs were fundamental to some of the events making this part of Britain's contribution very significant. Many technological breakthroughs were made in this time period, which facilitated the battle of Atlantic, Britain, bombing of Germany and D-Day, mostly in the form of tanks, bombs, medicine and radar. Technological breakthroughs were very significant as they contributed to many different battles. In the Battle of Britain, the radar allowed the RAF to intercept the Luftwafte, because they knew where and when they would appear. Penicillin was used to reduce the number of soldiers lost and taken by disease in ground battles such as D-Day. However, Britain's tanks were terrible compared to the Germans and the men used in D-Day were much more important than the technology. After D-Day, the contribution of Britain is minimal. The Russians are the ones who capture Berlin and take over it. The British supplies drop as well. Britain's contribution to the war had ended. However, the Americans armament contributions were at their peak at this time and the Americans were the most significant power at this time. I think that the Britain's contribution to the war effort changes significantly over time. The contribution of Britain at the start of the war is quite high as we look at the significance of the Battle of Britain and Atlantic. The significance of the British forces rises towards D-Day, and post D-Day, there is a little contribution from the British. We can also see that the major powers in the war i.e. Russia and America, have contributed more than Britain towards the end of the war. ...read more.