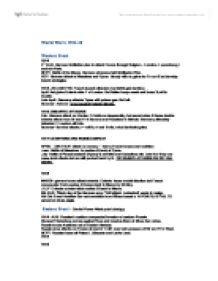 World War I. 1914-18 timeline of major events in the econflict

Allies unco-operative unitl summer 1918 at end of war. Br and Fr preferred to worjk with distant ally Russia instead of eachother. Artillery bombardment. - The most destructive method of mass killings and damage. - Large artillery barges on land was the military method extensively used to break the trench system. In Battle of the Somme, Br battled with 8 days of artillery bombardment to cut through barbed wire and reach G trenches. - Used for long range bombardment e.g. Germans fired shells at Paris from 120km distance. - Development of modern mortars and the use of massed artillery barrages. Guns were used to fire shells containing toxic chemicals. - Used more as a deterrent to the enemy instead of planning targeted areas. Gas attack - Chemical warfare ranged from disabling chemicals, such as tear gas and the severe mustard gas, to lethal agents like phosgene and chlorine. - Germans first used a mass gas attack method in Jan 1915 on Russia, but the desired effect was dismal as Russia was too cold. - German army's first killing agent was chlorine, produced by major manufacturing companies like I G Farben. - Poison gas was used by the French in 2nd Ypres battle 1915. - Killing capacity of gas was minor- accounted for 4% of deaths. Used more often as the war proceeded, became less effective immediately. But gas on the long term came to be a psychological weapon and acid slowly lead to lung damage and eventually death. ...read more.