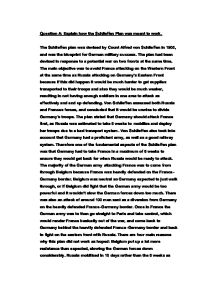 Question A: Explain how the Schlieffen Plan was meant to work. The Schlieffen plan was devised by Count Alfred von Schlieffenin 1905, and was the blueprint for German military success. The plan had been devised in response to a potential war on two fronts at the same time. The main objective was to avoid France attacking on the Western Front at the same time as Russia attacking on Germany's Eastern Front because if this did happen it would be much harder to get supplies transported to their troops and also they would be much weaker, resulting in not having enough soldiers in one area to attack as effectively and end up defending. Von Schlieffen assessed both Russia and Frances forces, and concluded that it would be unwise to divide Germany's troops. The plan stated that Germany should attack France first, as Russia was estimated to take 6 weeks to mobilize and deploy her troops due to a bad transport system. Von Schlieffen also took into account that Germany had a proficient army, as well as a good railway system. Therefore one of the fundamental aspects of the Schlieffen plan was that Germany had to take France in a maximum of 6 weeks to ensure they would get back for when Russia would be ready to attack. The majority of the German army attacking France was to come from through Belgium because France was heavily defended on the France-Germany border. ...read more.

Explain how far you agree with this statement. The stalemate was finally broken in spring 1918 with the help of America joining the war in April 1917. Germany's attack along the Western Front with all she had left could not be obtained to the same degree, and as a result the war ended in November 1918, 9 months after the deadlock was broken. Here are the main factors that affected the course of the war. New Technology New technology affected the war by changing the way that battles were fought and racing to find new ways to take land when the trenches were dug. An example of this new technology was the tank; it provided an impenetrable shield around a small group of men making it possible to cross over no-man's land and gain territory in the trenches. The tank had many disadvantages though; it was a new development so it was bound to have flaws, this lead to many tanks breaking down. The terrain and the climate had affects on these tanks, making them break down or just get stuck, and so they were then used less frequently. Chlorine gas was produced by the Germans in 1915; phosgene and mustard gas were used by both sides as the other countries caught on. Gas attacks weren't usually highly successful because they were so dependant on knowing all aspects of the weather and then getting it correct, also if the weather is not predicted correctly the gas could be blown back and cause death or severe injuries to their own team, making it not particularly beneficial. ...read more.

However May the 7th 1915 over one thousand people were killed, including one hundred and twenty four Americans when a German U-Boat sank a passenger liner called the Lusitamia. Germany apologised for this incident and said they would not sink passenger vessels in the future, but they did not agree to stop submarine warfare against ships bringing military supplies to the Allies. England intercepted a telegram between Germany and Mexico, this Zimmermann telegram said that the Germans would help the Mexicans take back New Mexico, Arizona, and Texas in return for Mexican aid to Germany if America entered the war. This message made the American people angry and almost forced them into the war. Conclusion The new technology contributed to the stalemate being broken by making the opposing side have the figure ways to better or defend against new technology. Blockading of German ports made Germany desperate in the later years of the war, forcing them to gamble and risk everything. The Ludendorff offensive was an act of desperateness due to the starving soldiers and civilians, Germany knew they couldn't carry on much longer. Overall I think the war was tipped more into the Allies favour when America joined the war, this made the possibility of ending the war foreseeable. I think this because America brought lots of fresh troops and machinery to aid the counter attack. The German forces gambled by committing themselves to the Ludendorff offensive, however this did not pay off, so on the 11/11/1918 the armistice took effect and the war was over. ...read more.