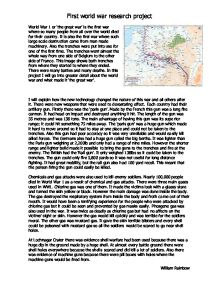 World War 1 or 'the great war' is the first war where so many people from all over the world died for their country. It is also the first war where such large scale destruction came from man made machinery. Also the trenches were put into use for one of the first time. The trenches went almost the whole way from one side of Belgium to the other side of France. This image shows both trenches from where they started to where they ended. There were many battles and many deaths. In this project I will go into greater detail about the world war and what made it 'the great war'. I will explain how the new technology changed the nature of this war and all others after it. There were new weapons that were used to devastating effect. Each country had their artillery gun. Firstly there was the 'paris gun'. Made by the French this gun was a long fire cannon. It had head on impact and destroyed anything it hit. The length of the gun was 35 metres and was 138 tons. The main advantage of having this gun was its superior range; it could hit something 75 miles away. The 'paris gun' was a huge gun which made it hard to move around so it had to stay at one place and could not be taken to the trenches. Also this gun had poor accuracy so it was very unreliable and would easily kill allied forces. The Germans also had a huge gun called the big bertha. It was lighter than the Paris gun weighing at 2,200lb and only had a range of nine miles. However the shorter range and lighter build made it possible to bring the guns to the trenches and fire at the enemy. The British had the 'Rail gun'. It only weighed 138lbs so it could be taken to the trenches. ...read more.

They had to defend from middle the 'saucer'. Ypres had been defended but at a terrible cost. The British had suffered over 58,000 casualties in an area less than 10 miles north to south and five miles from east to west and had been forced back into a salient - a bulge of land surrounded on three sides - and was overlooked by the German army. Ypres is a piece of land in a region of Belgium called Flanders, which means 'flooded land'. The area around Ypres floods easily and effective drainage systems are needed badly. During the First World War drainage ditches were destroyed by constant shelling. As a result soldiers frequently found themselves fighting in appalling conditions. Men had to go through long periods crouching in water sometimes waist deep. This led to swollen feet, impeded circulation and an inability to walk (a condition later known as 'trench foot'). During the first winter of the war the weather was terrible, turning the low, swampy country into a bog and on every side of Ypres there was huge amounts of mud. The cover the trenches provided was very poor because the walls constructed were unstable; almost as fast as they were built they slid back into the slush of mud at the bottom of the trench. In the first battle of Ypres the British and French had to just defend Ypres and hold their position. The Germans, who had mostly the upper ground had much better artillery and ammunition was likely to take over Ypres. However, they managed to keep Ypres so they were quite successful. By the beginning of 1915 it was the German army that held the advantage. They held the ridges that surrounded Ypres and seemed to have a limitless supply of ammunition as they constantly shelled the town. On the other hand the British appeared to be over-stretched. The British Expeditionary Force of skilled professional soldiers had suffered 90% casualties. ...read more.

Also there was a tree in no-mans land called the danger tree. It was named the danger tree because it was surrounded by German trenches and was used as target practice by the Germans.I found out about a man called Lewis McGee. He was killed in action at the Battle of Passchendaele, on 13 October 1917. Lewis McGee won a Victoria Cross he was born on the 13th May 1888 and died on the 13th October 1917. He was an Australian recipient of the Victoria Cross, the highest and most prestigious award for gallantry in the face of the enemy that can be awarded to British and Commonwealth forces. He was 29 when he died. He was a sergeant in the 40th Battalion, which was from Tasmania. On the 4th October 1917 in Belgium, Sergeant McGee's platoon was suffering severely and the advance of the company was stopped by machine-gun fire from a pill-box post. Sergeant McGee rushed to the post armed only with a revolver, shooting some of the crew and capturing the rest, which enabled the advance to proceed. He reorganized the remnants of his platoon and did splendid work during the consolidation of the position. His coolness and bravery contributed largely to the success of the company's operation. He was killed in action shortly afterwards. World war one was a war that was fought stupidly and arrogantly by both sides. Every general told their men to just run across no-mans land and die. Each battle was lost by one side. Then battles were rarely won by a side. The generals were at fault for all of battle loses. So I believe that the war could have been over much quicker if trenches were not introduced. The bravery of all the soldiers should be recognised because each one of them had to endure pain, loss and the contemplation of death. This war was all about lions being led by donkeys. ?? ?? ?? ?? First world war research project William Rainbow ...read more.