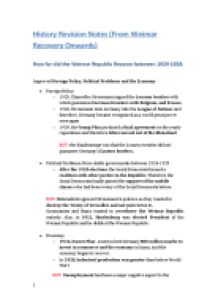 WWII History Revision Notes. How far did the Weimar Republic Recover between 1924-1928.

﻿History Revision Notes (From Weimar Recovery Onwards) How far did the Weimar Republic Recover between 1924-1928: Improved Foreign Policy, Political Problems and the Economy 1. Foreign Policy: 1. 1925, Chancellor Stresemann signed the Locarno treaties with which guaranteed German frontiers with Belgium, and France. 2. 1926, Stresemann took Germany into the League of Nations and therefore, Germany became recognized as a world great power once again 3. 1929, the Young Plan produced a final agreement on the yearly reparations and therefore Allies moved out of the Rhineland BUT: the disadvantage was that the Locarno treaties did not guarantee Germany?s Eastern borders. 1. Political Problems: More stable governments between 1924-1929 1. After the 1928 elections the Social Democrats formed a coalition with other parties in the Republic. Therefore the Social Democrats finally gained the support of the middle classes who had been weary of the Social Democrats before. BUT: Nationalists opposed Stresemann?s policies, as they wanted to destroy the Treaty of Versailles and not just revise it. Communists and Nazis wanted to overthrow the Weimar Republic entirely. Also, in 1925, Hindenburg was elected President of the Weimar Republic and he disliked the Weimar Republic. 1. Economy: 1. 1924, Dawes Plan- America lent Germany 800 million marks to invest in commerce and the economy in loans. And the economy began to recover. 2. In 1928, Industrial production was greater than before World War I BUT: Unemployment had been a major negative aspect to the recovery due to Germany?s rising population. In 1929, 14% of the working population was unemployed. Also, America?s economy was dependant on loans that could be withdrawn at any time! (and which were, see later) Weimar Culture: It became a cultural centre in Europe. Strict Pre-war censorship was removed (i.e. woman became more independent, began to smoke and drink socially, wear miniskirts etc). BUT: this is the reason why Nationalist and Right-wingers hated the Weimar Republic and its culture it embraced because it undermined traditional German values. ...read more.

The prison system was harsh because the judges took an oath of loyalty to Hitler Heinrich Himmler 1. He was the leader of the SS and was feared. He also helped to exterminate 6 million Jews. Was the Enabling Act or the Night of Long of Knifes more Important in helping Hitler Strengthen his power? Enabling Act, March 1933 Night of the Long Knifes, 30th June 1934 He was able to pass laws without the approval of the Reichstag ? helps him become a dictator It helped Hitler get the support of the SS (the Army) as the SA was crushed by the army It led to the abolition of trade unions and the banning of all other political parties ? helped Germany become a one-party state It gets the support of the Upper classes and big businesses (The SS had the support of big businesses) The army took an oath of loyalty to Hitler to prevent a military coo in the future Why was there so Little Open Opposition [q]to Nazi Rule? 1. No Reason to Oppose (People felt they were better off under the Nazis) 1. Jobs were provided by the Nazis (i.e. the Autobahn was built ? Industrial jobs created and the German Workers Front) 2. Foreign Policy success (Germany became a powerful country again, Germanys industrial production was much larger than it had been under the Weimar Republic) 3. Propaganda (made people believe that the Nazi party could solve everyone?s problems and destroy the communist threat) 1. Fear, People Didn?t Dare Oppose (police state) 1. Terrorising opposition to the Regime (i.e. the Gestapo, SS, Concentration Camps) 2. Local Nazi party leaders who would inform the SS 3. Fear of losing business ? Intimidation from the SS who would blacklist a lot of businesses if the owners did not support the Nazis 1. Limited Opportunities to Oppose: 1. Political Parties and Party Meetings were banned 2. No elections ? One party state 3. No free media (political newspapers were banned) 4. ...read more.

Josef Goebbels was in Charge of this. [ae]TIP FOR REMEMBERING: Kristallnacht is on the same day (obviously not same year) as the Munich Putsch [af]BUT, extermination of the Jews did not start till 1941. [ag]They benefitted the most from the Abolition of trade unions in May 1933 ? workers could be forced to work longer and harder [ah]Introduction of the German Workers Front meant people could afford things now although the wages were often lower than unemployment benefit! [ai]Smaller Jewish businesses were closed down BUT more people were going to large businesses instead [aj]They set up these two organisations to reduce unemployment which was extremely high at 5.5 million in 1933. [ak]This could again be a reason why there was little open opposition towards the Nazis. [al]REMEMBER: government set up the German Workers Front and the Reich Labour Service to tackle unemployment (see above page) [am]This was mainly due to the success of the World Economy BUT he spent a lot of the money on preparing for war [an]Arms had taken priority over agricultural production yet agricultural production still took place. [ao]They would learn Discipline and Militarism to prepare them for the Army. They would also learn to worship the Fuhrer and Anti-Semitism. [ap]Indoctrinate? This means turn the boys aged up to 16 into loyal Nazis [aq]I.e. for girls to attend BDM, posters would show the girls being pretty and motherly when they are older. [ar]E.g. the Volkstrum last ditch defence force. Shows they were likely to be successful BUT the war came too soon [as]The war came too soon and the ?1000? year Reich that Hitler said he wanted never happened. Therefore, his policies to children failed overall. [at]E.g. the Mothers cross was offered to women who had more than four children. They would then be respected highly by the Hitler Youth and given VIP status at Nazi meetings. [au]Life was now much harder for women after the policy change in 1937. They had to keep having children and look after children whilst finding a job and working. ? VERY HARD after 1937 ...read more.