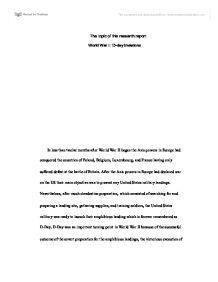 The topic of this research report: World War II: D-day invasions In less than twelve months after World War II began the Axis powers in Europe had conquered the countries of Poland, Belgium, Luxembourg, and France having only suffered defeat at the battle of Britain. After the Axis powers in Europe had declared war on the US their main objective was to prevent any United States military landings. Nevertheless, after much clandestine preparation, which consisted of searching for and preparing a landing site, gathering supplies, and training soldiers, the United States military was ready to launch their amphibious landing which is forever remembered as D-Day. D-Day was an important turning point in World War II because of the successful outcome of the covert preparation for the amphibious landings, the victorious execution of the amphibious landings, and the fruition and culmination of the American victories that occurred as a result of the landings on the beaches of Normandy on D-Day. On July,15, 1943 the COSSAC, Chief of Staff Supreme Allied Commander, presented his covert plan for "Overlord" to the British Chiefs of staff*1*. This plan consisted of three parts: reconnaissance, the psychological conditioning of the enemy, and the physical conditioning of the chosen landing site. The first part of this covet plan was photo reconnaissance. This part of the plan consisted of photos of all most fifteen thousand miles of coastline which represented a large list of landing sites. ...read more.

On the Utah beachhead alone they cleared some seven-hundred yards of beach in two hours and another nine-hundred yards by the afternoon*8*. After a year of planning, covet preparation, and conditioning of both the enemy and the landing sites the Allies were ready to launch "Overlord". On the night of June,5,1944 and the early morning of June,6,1944 the Allies launch "Overlord"*9*. The first stage of "Overlord" was to land paratroopers inland to secure any roads and bridges that might lead to and from the landing sites. The first paratroopers to land were the British sixth Airborne Division. Their mission was two secure the bridges on the left flank west of the Dives river and they were also ordered to destroy a coastal battery and were to then wait until they were relieved. Even though they lost some men they completed both of their objectives*10*. The second part of "Overlord" was the five separate landings themselves. The first landings on Utah,by the Americans, and on Sword, by the British, were overall successful in forming a defendable position from which more troops could land safely. The Sword beachhead had been given the objective of capturing the city of Caen but, they only were able to reach the outskirts of Caen because of German armor in the city*11*. The Utah landing parties moved inland and were able to hold off and secure scattered defense positions until they were able to link up with the other beachhead landing parties*12*. ...read more.