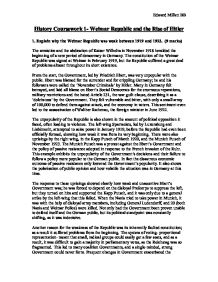 History Coursework 1- Weimar Republic and the Rise of Hitler 1. Explain why the Weimar Republic was weak between 1919 and 1923. (9 marks) The armistice and the abdication of Kaiser Wilhelm in November 1918 heralded the beginning of a new period of democracy in Germany. The constitution of the Weimar Republic was signed at Weimar in February 1919, but the Republic suffered a great deal of problems almost throughout its short existence. From the start, the Government, led by Friedrich Ebert, was very unpopular with the public. Ebert was blamed for the surrender and for crippling Germany; he and his followers were called the 'November Criminals' by Hitler. Many in Germany felt betrayed, and laid all blame on Ebert's Social Democrats for the enormous reparations, military restrictions and the hated Article 231, the war guilt clause, describing it as a 'dolchstoss' by the Government. They felt vulnerable and bitter, with only a small army of 100,000 to defend them against attack, and the economy in tatters. This sentiment even led to the assassination of Walther Rathenau, the foreign minister in June 1922. The unpopularity of the Republic is also shown in the amount of political opposition it faced, often leading to violence. The left-wing Spartacists, led by Luxemburg and Liebknecht, attempted to seize power in January 1919, before the Republic had even been officially formed, showing how weak it was from its very beginning. ...read more.

However, many people were severely and irrevocably changed in their attitudes towards democracy by the depression, and many people now felt ready to hear what the Nazis had to say. Many were becoming disillusioned with the Weimar Government, who were raising taxes and cutting public spending to prevent inflation. These were sensible policies, but were very unpopular with the public. When five major Berlin banks collapsed and businesses folded in 1931, the middle classes turned to the Nazis. The Treaty of Versailles had created bitterness, as Germany was vulnerable and weak. Combined with the poverty many Germans faced, political opinion became polarised. The Nazis blamed 'the enemy within': the Government, as well as Jews and Marxists. This was what the people wanted to hear: a party who felt the same way as they did and would respond to their needs. However, as the fascists gained popularity, so did the Communists, and this led to fighting in the streets during the elections of 1932. However, circumstance is not the only reason for the Nazis rise to power- Hitler's personality and oratory also played a large part. He was seen by many as fresh and enigmatic, compared to the ageing Hindenburg, a war hero past his prime, without a desire to make Germany great again. Hitler travelled by air (he visited 20 cities in 7 days while canvassing for the presidential election in 1932, which he lost, but managed to gain 13.4 million votes) ...read more.

If Hitler had been able to gain power in the Munich Putsch, he could have been a 'flash in the pan', overthrown soon after by another violent group, such as the Communists. However, by gradually winning over the public in an orthodox manner, he was voted into power, and was even able to persuade other parties to vote the Reichstag out of existence. Of all the reasons cited for Hitler's rise to power, the most important are the impact that the depression had on Germany, and the decision by Hindenburg and Von Papen to appoint him Chancellor. The economic depression gave him an ideal opportunity to gain popularity, especially compared to the inept way that the Government was dealing with it. Ostensibly, if the depression had never happened, it is possible that there would have been no political climate for Hitler and his extremist policies. The risk that was taken in appointing Hitler as Chancellor is another key reason; it allowed Hitler to get into power, from where he could use his personality and rhetoric to take even more control. Hitler also made use of propaganda and the intimidating SA to win over the German people, but he had a lot of luck. The timing of the depression, the (dubious) Reichstag fire, and the failure of the Munich putsch are all examples of circumstance prevailing in Germany that helped Hitler. He was a great politician, but it is undeniable that he was greatly aided by fortune. ?? ?? ?? ?? Edward Millett BB ...read more.