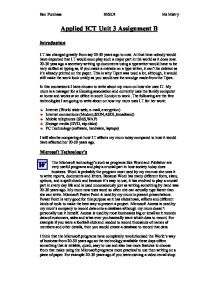 Applied ICT Unit 3 Assignment B Introduction I.T has changed greatly from say 20-30 years ago to now. At that time nobody would have expected that I.T would soon play such a major part in the world as it does now. 20-30 yeas ago a secretary writing up documents using a typewriter would have to be very skilled at typing as, if you make a mistake on a type writer, it can't be deleted as it's already printed on the paper. This is why Tipex was used a lot, although, it would still make the work look untidy as you would see the smudge made from the Tipex. In this coursework I have chosen to write about my mum on how she uses IT. My mum is a manager for a Housing association and currently uses the family computer at home and works at an office in south London to work .The following are the five technologies I am going to write about on how my mum uses I.T for her work: * Internet (World wide web, e-mail, encryption) * Internet connections (Modem,ISDN,ASDL,broadband) ...read more.

This may be true but I.T has also created many new jobs and so it's just a matter of how people moving on to a different era in terms of businesses. Jobs that I.T has created are jobs such as Website designers, engineers and not to mention phone engineers and electricians. My mum's work pattern follows at that on a usual working-day she gets the tube to south London and there she just types up reports and run's the base of the company. Nearly every afternoon she has to attend to meetings. General business meetings have changed a lot as now my mum is just starting to get used to using programs like power point which she then does her presentation on and then shows it by using an interactive whiteboards. Interactive whiteboards have become a common feature just recently and are not only used in conferences but are now even used by schools to teach pupils. Interactive whiteboards are basically projectors except you can interact with them by using an electronic pen. Using the interactive whiteboards is a great way to present a presentation as it gets the audience's full attention unlike 20-30 years ago when you had to be a good speaker to get your point across. ...read more.

The Microsoft technology's such as word and power point have made a big difference when you are writing a report or when you are making a presentation. My mum is expected to write a report using Microsoft Word just as I am expected to write this assignment. Also, when mum travels instead of wasting time she can actually now because of laptops write her documents or relax and watch a DVD. The use of Email is used so much now that the post-office are having a lot of problems and are having to pay off a lot of workers. Some people use cases like this to attack I.T technology's but then to defend the argument you could say that I.T has created many jobs as well. Mobile phones affect my mums way communicating at work in a positive as she doesn't actually use a mobile phone as much to talk but to send an email by multimedia messaging or to send a text by using SMS. If it wasn't for I.T then my mums' job wouldn't exist or would be very hard to do. ?? ?? ?? ?? Ben Purchase 10/SC4 Ms Mistry ...read more.