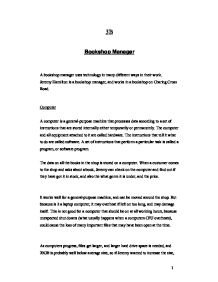 3B Bookshop Manager A bookshop manager uses technology in many different ways in their work. Jeremy Hamilton is a bookshop manager, and works in a bookshop on Charing Cross Road. Computer A computer is a general-purpose machine that processes data according to a set of instructions that are stored internally either temporarily or permanently. The computer and all equipment attached to it are called hardware. The instructions that tell it what to do are called software. A set of instructions that perform a particular task is called a program, or software program. The data on all the books in the shop is stored on a computer. When a customer comes to the shop and asks about a book, Jeremy can check on the computer and find out if they have got it in stock, and also the what genre it is under, and the price. It works well for a general-purpose machine, and can be moved around the shop. But because is it a laptop computer, it may overheat if left on too long, and may damage itself. This is not good for a computer that should be on at all working hours, because unexpected shut downs (what usually happens when a computers CPU overheats), could cause the loss of many important files that may have been open at the time. ...read more.

Another disadvantage is that 56 kilobits per second is quite a slow connection, and these days, a connection can go up to about 4 megabits (4,000,000 bits) per second. Having a small bandwidth affects Jeremy greatly, because using the internet in conjunction with his work is very important. To be on higher ground it would be better for Jeremy to get broadband; broadband refers to communications medium that uses wide-bandwidth channels for sending and receiving large amounts of data, video or voice information. On broadband, multiple channels can be used, so many people can be on at the same time, and it is not a phone line, it is a digital cable that is specifically for internet connections. An example of a broadband provider is NTL; they provide broadband speeds from 768Kbps, to 3Mbps, which is nearly 55 times faster than a regular dial up connection. Probably a good connection for Jeremy is a 1Mbps connection, as it is relatively cheap, at �9.99 per month, and meets his connection and download needs. The other advantages of broadband are that it can be on all the time, and with NTL, it is paid monthly, so they do not have to worry about extra charges. The disadvantages of broadband would be that it would have to get installed, which could cost money, and can only be used at that broadband connection, not anywhere else. ...read more.

Television Jeremy has a Sony 20" FD Trinitron(r) WEGA(r) TV KV-20FS120, he watches it on a regular basis. He mainly watches it for the news and a few programs that he enjoys watching, such as Hollyoaks and The Bill. He has terrestrial television, and a VHS recorder to record and watch programs he has recorded. If he wanted to get more channels, he could get freeview; which is a digital service operating at Ultra High Frequencies (UHF), opposed to his current VHF terrestrial, and is a very good technology to have, because all that needs to be bought is the freeview box, and no subscription charges have to be paid. This would also be good for Jeremy because he likes watching the news, and on freeview, there are at least three regular news channels, and one sports channel, so he can watch the news at any time of the day. It has surround sound, which Jeremy enjoys, but there are only two speakers, and to get the full surround sound effect, he would have to have more speakers, spread around the room. An example of a technology that he could buy could be Acoustic Energy Aegis Evolution 3b. This is a powerful surround sound system with 6 speakers and a high power usage, which increases volume, and it has excellent quality. But this is a very expensive technology, so Jeremy would not buy it, but go for a lower priced, more economised version. ?? ?? ?? ?? 1 ...read more.