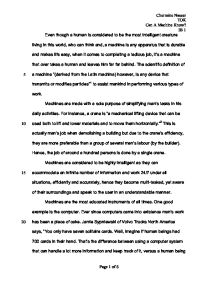 Even though a human is considered to be the most intelligent creature living in this world, who can think and, a machine is any apparatus that is durable and makes life easy, when it comes to completing a tedious job, it's a machine that over takes a human and leaves him far far behind. The scientific definition of a machine "(derived from the Latin machina) however, is any device that transmits or modifies particles"1 to assist mankind in performing various types of work. Machines are made with a sole purpose of simplifying man's tasks in his daily activities. For instance, a crane is "a mechanical lifting device that can be used both to lift and lower materials and to move them horizontally."2 This is actually man's job when demolishing a building but due to the crane's efficiency, they are more preferable than a group of several men's labour (by the builder). Hence, the job of around a hundred persons is done by a single crane. Machines are considered to be highly intelligent as they can accommodate an infinite number of information and work 24/7 under all situations, efficiently and accurately, hence they become multi-tasked, yet aware of their surroundings and speak to the user in an understandable manner. ...read more.

These machines are specifically designed to perform a single task which they do perfectly. For example, "a machine only cuts a metal, checks the metal if its cut well, another puts the bolts into the nuts and another that counts and packs them all, ready for exporting."6 This makes it easy for mankind to only do his sales while the machine does all the work. Machines also lessen the duration taken to perform the same task that a man does, yet being very efficient and effective. The Coca Cola Company in Nairobi, Kenya has researched a lot and came to a point to say that the machines they use in their production area is up to "twenty five times faster than when they had men employment."7 Hence, it saves up a lot of working hours, making it most preferable compared to man. A machine has the ability to perform several tasks although it itself is only one by number. These are also known as multi -tasked machines. Machines that fall under this criterion are like mobile phones. Nokia's new collection comprises of the N-series. These kinds of phones are manufactured to carry out multiple-tasks to satisfy the buyers (us). This solitary device can "play up to 6000 music songs, save and play 300 music videos, slows the user to surf on its wireless internet services, allows taking photographs and ...read more.

Also a brilliant British mathematician Alan Turing devised the Turing test as a way of showing a machine was intelligent. The key test, said Turing, was "whether a machine could fool someone into thinking they were talking to a real person."13 They are very human friendly, hence, they can act like best friends with whom secrets can be shared. This may not be possible by man, to the stage of correctness (of languages) spoken by the machine. Therefore, machines can be said to have "knowledge" as they too can listen, understand and reply just like a human, but with a proper and rightful language that the listener comprehends to his best. Although humans were the creator of these miraculous devices, the machines surpass man. The machines are said "to know" (the ability to undergo certain types of understanding) even though they do not have a physical brain. We can therefore say machines are definitely smarter, faster, more efficient and better than any human being. Machines do not make mistakes like humans do unless there is a problem in their programming. Another side of a machine's ability can be viewed from the point of view of exploring the machine's "artificial intelligence" meaning the knowledge and understanding a machine has even without an actual physical brain like that of a human. This would talk about how the machine happens "to know". ...read more.