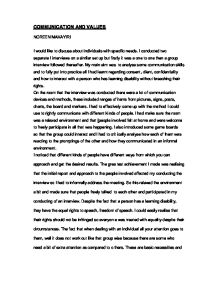 COMMUNICATION AND VALUES NOREEN MAKAYIRI I would like to discuss about individuals with specific needs. I conducted two separate I interviews on a similar set up but firstly it was a one to one then a group interview followed thereafter. My main aim was to analyse some communication skills and to fully put into practice all I had learnt regarding consent, client, confidentiality and how to interact with a person who has learning disability without breaching their rights. On the room that the interview was conducted there were a lot of communication devices and methods, these included ranges of items from pictures, signs, posts, charts, the board and markers. I had to effectively come up with the method I could use to rightly communicate with different kinds of people. I had make sure the room was a relaxed environment and that [people involved felt at home and were welcome to freely participate in all that was happening. I also introduced some game boards so that the group could interact and l had to critically analyse how each of them was reacting to the promptings of the other and how they communicated in an informal environment. I noticed that different kinds of people have different ways from which you can approach and get the desired results. ...read more.

Working on a relaxed environment that was informal and the introduction of some games made me realise that it's so easy to establish relations as long as there is a common understanding i.e. proper communication and realising the levels of understanding of different kinds of people so l had to account for their individuality and l was taking them as they are individually. I made no mistake of regarding them as a group because it might have sidelined some and others cold have seen themselves as castaways. I had to go an extra mile with each and every client so that they felt part of the family in as much as this is the most important way to make them feel accepted and part of the society. Also taking their suggestions, asking for the greater part of their input then placing little additional made them realise that they were instigating the entire meeting I was just there to guide what we were discussing. The way l was addressing them made them realises and feels respected at all times. The way we were communicating also gave an insight of how the set-up was. Despite all the lovely, homely and calmly environment l encountered some barriers throught out my meeting. ...read more.

Looking at people from the perspective that they mean a lot, are effective and have the right to talk, and freely speak their mind out this makes it easier to realise that if we get the communication barrier drawn down then it will be easy to understand each other despite the situations. I found out that I had taken a lot of things for granted but as soon as l took a step back and allowed these people to do much interaction amongst each other, I noted how they can easily realise the common things they had with one another and how they could create a homely environment for each other and even accommodate each other. I managed to get the best out of it as l was guiding the talks amongst the entire group. One thing l noticed has to effectively change is the atmosphere we create. We need to have a friendly and relaxed environment at all times then this makes it easier to get everyone to chat and participate in the events for the particular time. Also the way we listen to people with learning disability, we need to clearly listen to how and what they say so as to give proper guidance if need to be. I realised there is a lot we can get from the people with learning disability especially in how they view a lot of things which we had taken for granted. ...read more.